The story of Monkey 47 is attributed to an Indian born British Commander who was stationed in Germany after the second world war. Inspired by the Black Forest through the lens of his family’s heritage he combined British influence, Indian botanicals, and the natural flora of the German forest to create a complex gin he called Schwarzwald Dry Gin, along with the note Max the Monkey.

You see, this Commander also helped rebuild the world-famous Berlin zoo, and during the course of this he came to support Max, an egret monkey, who lived in the zoo. So it might seem natural that years after the fact in retirement, he retained an affection for the monkey he sponsored, and when he made his gin, he named it after him.

On botanicals alone, boasting an ostentatious 47, it might be the most complicated gin on the market, but to throw you one more curveball, it’s also built on a base spirit of molasses.

The nose is mentholated juniper, pineapple sage, lemon verbena, lavender, rose, hibiscus and lime. (!) This encyclopedic list merely reflects how incredibly complex and brightly aromatic this gin is. Your mileage might vary. There’s a lot in here, and I’m not sure any experts are going to agree on the exact list you get here on the nose. It’s nicely blended with a lot of hints of clues; rabbit holes of aroma that can be explored only to come up empty with a vague “floral” or “fruity” admission.

As the spirit warms, herbal notes emerge more prominently. Oregano and honeysuckle appear fleetingly, like needles in a haystack being shuffled before your very eyes. A lot going on here, and it’s all quite engaging.

The palate starts with some minty, herbal notes. Herbaceous juniper, blackthorne, lavender and an acute resiny pine note that comes across as more spruce/rosemary. As the taste progresses, we get peppery, vegetal notes, harmoniously entwined as if a single botanical. The finish, we get oily, aromatic herbs with peppermint leaves, lemon balm, blackberry and a faint pepper and green tomato aftertaste.

Fresh and fruity, with a lot of complicated nuance. There’s two levels on which you can enjoy this spirit: firstly, you can just appreciate the way it blends together to create a single powerful presence. Secondly, you can sit down as if to study it and probe the way this myriad of botanicals unravel on your palate. I think it’s rewarding for both kinds of drinkers, and it gets high marks in my book for the complexity and balance.

The first thing that caught my eye was Scarlet Beebalm. I know it as an ornamental plant from gardens [and it attracts butterflies and hummingbirgs by the way]. The Oswego peoples of upstate New York taught Europeans a couple of uses for the plant. Resin from the plant is a natural soothing agent, often used for bee stings and the like. A tea can also be made from the plants leaves. For those of you curious about what it tastes like, it’s worth nothing that it’s also called bergamont by gardeners because its aroma is similar to that of the orange [and other common gin botanical] of the same name.

The Dog Rose is another flower [but this time, native to Europe] that was used as a tea. The plant has a high level of vitamin C and found its way into jams, jellies and syrups, especially during times of conflict. Bulgarian peoples have used the hips of the Dog Rose to make wine; it’s an important flavoring addition to the European soda Cockta. The wild, climbing, vine is incredibly hardy, persisting in the United, growing in road side ditches, long after gardeners have abandoned the plant. In short, although the name “Dog” rose implied that some peoples found the plant worthless, its importance in several food cultures tells a story that’s otherwise. And here it is, in this German gin as well. 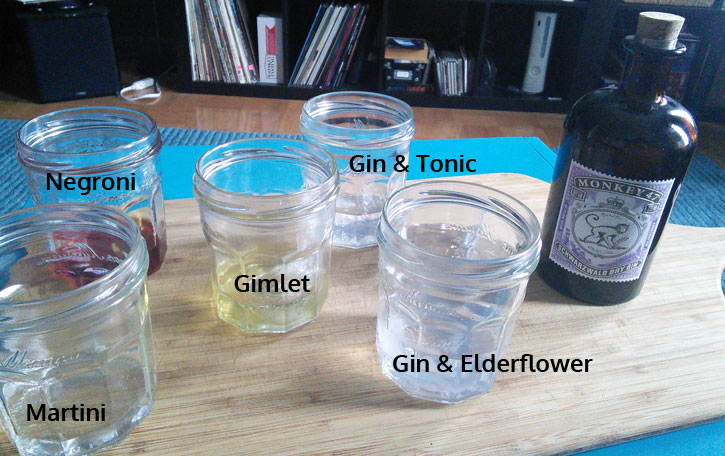 Mixed with Hansen’s Tonic in a Gin and Tonic, sweet pomelo at first with exotic herb garden notes on the after taste. Lemon verbena, lavender, garden mint, lead into a citrus-dominated finish with grapefruit and lemon zest. Quite nice.

Second, we mixed it with an Elderflower Lemonade. This was a pre-bottled, carbonated soda. Rose and Elderflower came on strong at first, with lemon dominating the mids. The gin shone in the lower noes as lavender, rosemary, sweet orange and birch came through. It was a tough task, the lemonade remained the star, but overall, the gin offered enough to decide this mixed drink was not without merit.

The Gimlet featured plenty of lime, but underneath: blackberry pie, strawberries, and other plump berry like notes jumped to the fore as well. Pungent and surprisingly fruity, this was a really interesting drink that showcased Monkey 47 in an unexpected way.

The Negroni was nice as well, with herbal, spice notes at first, setting the stage for an unctuous, fruity finish. Nice, though not as complex as I might have hoped.

Finally, we put together a Martini. Rosemary, coriander, mint, orange, lemon verbena, wormwood, up top, but with spruce tips and resiny juniper only barely poking through. To levy the criticism only here might not be fair, but there is precious little that comes out as juniper here. It’s quite nice, with a good flavor, but perhaps lacking in some key areas.

Let’s get it out of the way. The critique that can be fairly made of this gin is that it might be too contemporary and note enough juniper happening. I’ll grant you that; however, as for fans of contemporary style gins will likely find a new best friend here. Fantastic on its own, its mixes quite well, with a unique and powerful aromatic presence and thick, rich, mouthfeel. Yes, the price is rather steep, coming in at close to $100 for a standard 750mL equivalent; however, as a rare treat I highly recommend this gin, though at this price point I might be slightly more hesitant to recommend it if you’re going to be using it exclusively in heavy handed cocktails.