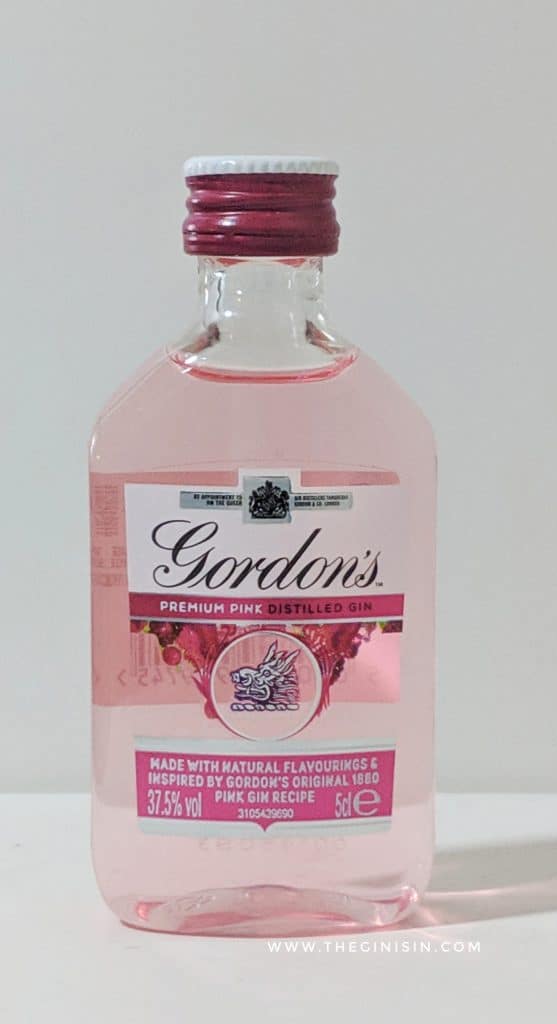 Pink Gin is hot. Still. Gordon’s Pink Gin comes in two variants. First there’s the 30% ABV that is sold in the United States. Then there’s the 37.5% ABV which is sold in the UK. Likely this has to do with the legal wording in the UK which mandates that anything called “distilled gin” have a minimum ABV of 37.5% ABV.

Gordon’s Pink Gin is not a Pink Gin cocktail. Other products such as the Bitter Truth’s Pink Gin are indeed the cocktail, but Gordon’s opted for something quite a bit different. Rather than competing with the cocktail, they’re looking to find a way into the increasingly competitive “flavored and sweetened gin” space.

Gordon’s Pink at 37.5% is a shade of carnation pink— and it is much less vivid on the shelf than the same gin at 30% ABV in the states.  It is flavored with “Natural flavors and certified colors.” The label is illustrated with fresh summer berries like raspberry and strawberry. And all of this is said to have been based off an actual 1880 Pink Gin recipe in Gordon’s company archives.

The nose is vivid and bright. Notes of strawberry and big round boysenberry. It’s bold and exceptionally floral. Blackberry jam, raspberry seeds— it’s all here. A complete rainbow of mainstream berries.

There’s a warmth early where you can get a bit of the base Gordon’s Gin. That means a bit of prickly blue juniper and some background spice. A touch medicinal towards the finish with notes of cough syrup, but also of blackberry jam and raspberry leaf tea.

In short, that added proof makes Gordon’s Pink Gin a superior product to many commercially available options at lower ABV’s. But I still think there are people doing top notch work in the Pink Gin concept like Lee Spirits out of Colorado Springs who still manage a bright jammy flavor without garish coloring and artificial sweeteners.