Here’s another in another in a series of famous/popular gins that I’m giving a better treatment to. I think that my initial review of Gordon’s might not have given the same thorough treatment that I’ve given other gins. Given its status as one of the most senior gins out there [having been produced since 1769!] I think it would only be right to give it a more thorough review.

As before, the original review is still available if you want to see what we originally said.

Ask some pedants “What’s your favorite Scottish gin” and they might reply “Gordon’s.” Although it originated in England, the UK version is currently distilled at Cameron Bridge in Scotland. The variation I have was not distilled in Scotland, it was distilled in Canada, and bottled in Norwalk, Connecticut. Gordon’s is truly international. So the idea that it’s of the place where it is distilled is somewhat nonsensical. It is British in origin, but it’s provenance has transcended the place where grain is turned into gin.  It’s purported to have at least four botanicals in it. Juniper, coriander and angelica are oft repeated and likely to definitely be among the bill. Licorice, orris, orange and lemon peel are also mentioned, but somewhat less frequently. The exact bill is a secret.

Nose is heavy with pine-laden juniper, with a peppery/resinous undertone. Coriander lurking on the edges as well, with a slight hint or citrus and a menthol character. Quintessentially classic.

The palate is more of the same. Bright piny juniper, with hints of coriander, lemon zest. The finish is medium-long in length with an unmistakable juniper burst, but there’s some complexities and complications which emerge that challenge the notion that Gordon’s is a one-note gin. Earthy spice, a hint of angelica, a touch of baking spice and a glow that slightly calls to mind a middle ground between licorice and mint. Certainly on its own, you can pick up a lot of depth and character, though I find that some of these intriguing low-notes are lost mixing. Fear not though, it does mix well, but it might lead you to believer there isn’t a lot going on here. There’s more than first glance might tell.

A note on Proof

I’m sorry for my friends in the UK, but the variant of Gordon’s bottled at 37.5% ABV is rubbish. It tastes of watered down gin, and much of the nuance is lost. Frankly, that lower ABV variant was among my first tastes of Gordon and I was not impressed by it. I’ve grown to appreciate how vastly superior the 40% ABV variation we’re fortunate enough to have in North America is, while I think that the 47.3% ABV export variation is superior in terms of appreciating the botanical nuance, I find that while it mixes better [owing to its strength], it doesn’t read as clearly as Gordon’s Gin. In short, I prefer the 40% bottling and the 47.3% Export Strength if you can find it, and would go out of my way to avoid the watered down version at 37.5% ABV. They’re all the same gin underneath, but as we find in many of our reviews strength does matter in terms of botanical representation and mixing. 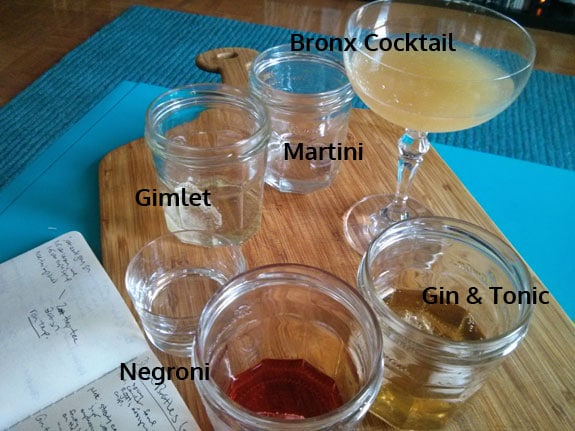 The Negroni had a crispness to the nose, and the palate was balanced with pine and citrus in the background, and a clean, albeit bitter finish. there was a good balance at work here, with it reading to me in my notes as “quintessential Negroni.” It’s exactly what you expect, and Quite nice.

We’re continuing to go traditional here as we mixed up a Gimlet. The nose seemed somewhat understated, but the palate was rife with lime, lemon, coriander and resinous pine notes adorning a medium length finish that ends with a flourish of sweet lime.

Next we tried a Bronx Cocktail. It was like an orange flavored martini (which c’mon, is essentially what this is, albeit a perfect one). Orange, oxidized wine notes, juniper and coriander in the middle and wormwood/nutmeg hints on the finish. Brimming with complexity, the cocktails seems to occupy a weird space between, “perhaps a bit too fruit forward for aficionados of bitter cocktails” and a “bit too bitter for aficionados of sweeter cocktails.” Though this isn’t on Gordon’s here. It does fine work, but doesn’t transform the cocktail.

Finally, it seemed fitting to mix up a Martini with Dolin Vermouth. A hint of citrus zest at first along with sunny juniper. Lemon and orange rind notes as well. Nutmeg with some intimations of anise and licorice as well. Slightly bitter towards the finish with a clean, dry texture. Wormwood and juniper whet the palate for the next sip.

Price: $11 / 750 mL
Proof: 80
Distiller:  Various
Origin: England originally, though this bottle Connecticut, via Canada, via England
Availability: Worldwide, though the 40% ABV offering is North America: Canada and the United States
Rating: Classic gin doesn’t get much more classic than this. Fans of traditional styles are probably already fans of this gin and don’t need my words to convince them to pick up a bottle. Fans of more contemporary styles are advised to give Gordon’s a chance in an academic sense (this is essentially what gin has evolved out of), but may find it wanting a bit for their mixing needs. It’s exactly what it intends to be, nothing more, nothing less. It’s a solid buy, especially at its price point.  [Rating:3/5]