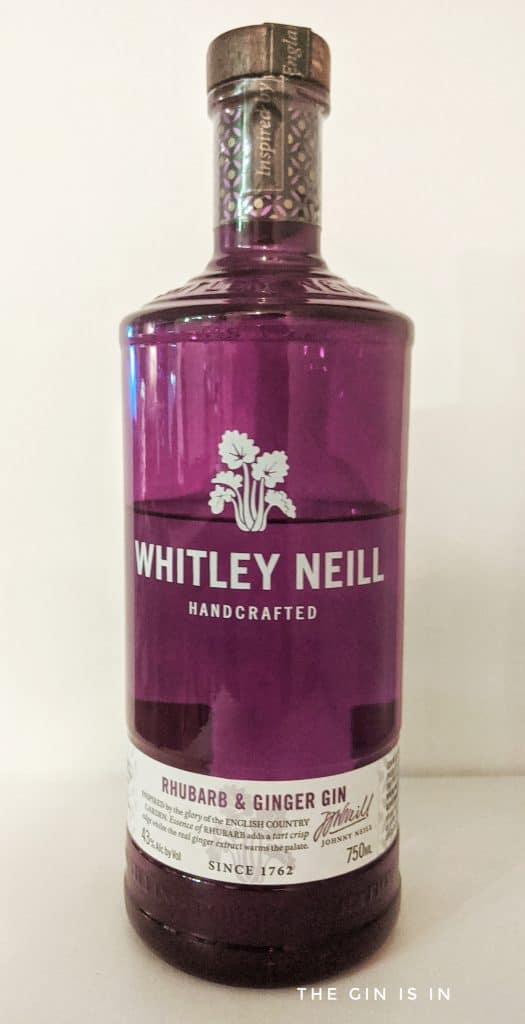 Whitley Neill Rhubarb and Ginger Gin is one of many in Whitley Neill’s lineup of flavored gins. Like others in the line, despite the vivid purple bottle the gin isn’t purple— this isn’t one of those magic gins. It’s a legitimately rhubarb and ginger flavored gin.

The gin is inspired by Johnny Neill’s family. “Johnny’s latest Gin evokes childhood memories of visiting his grandparents on their farm.”

Whitley Neill Rhubarb and Ginger Gin gets it flavoring from natural flavors, some of which are added after distillation. There is added sweetening as well. Despite coming in at 43% ABV, gin drinkers should be aware that it may come across as a gin liqueur.

Poured, there is a vivid almost inescapable literal aroma. Rhubarb and Ginger. Sitting in a glass, it settles a bit though the aroma remains generally sweet with some gin undertones.

Sipped, Whitley Neill Rhubarb and Ginger Gin hits you hard with the sweetness. Unlike some other rhubarb gins which have a strong sour component, this one is almost full blown strawberry rhubarb pie with a heavy heavy dose of sugar.

That’s not too say that there’s not other notes. Pleasant gin-like notes come on mid-palate. Juniper sparkles briefly with orange and licorice coming on later. Warmth comes on in the back of the palate; however, the sweetness is palatable and dominant.

Bartenders should be forewarned— Whitley Neill Rhubarb and Ginger Gin is not a gin to just plug in and replace other gins with. It is in its own category altogether with heavy sweetening. Though their Blood Orange Gin also has the sweetening, the citrus is more traditional in the gin canon and therefore it works in more places. Here, unfortunately, it’s just a lot of rhubarb and ginger candy. I find that pairing this gin with nearly anything that is sweet already— it becomes a bit cloying.

If you want a gin and tonic, look for Fever Tree Light on the sweet end— maybe something more bitter like Q helps balance things out. I found it to be almost unbearably sweet in a Negroni. There’s no amount of the other two ingredients, which are sweet already, that can make this a balanced drink.

However negative this sounds, I think that Whitley Neill Rhubarb and Ginger Gin has a place behind the bar as an ingredient that is used sparingly. For example just a splash on top of a gin and tonic adds sweetness and a really beautiful ginger/rhubarb note, without overwhelming the drink.

Honestly, just pair it with soda.

I suppose it’s not the best praise for a gin when I suggest that it’s best used as a syrup or sparingly like a bitters. Whitley Neill Rhubarb and Ginger Gin is incredibly sweet on its own to be the point of being kind of cloying. While it does deliver on the both of the promises in its name— rhubarb and ginger are present— it ultimately lacks much gin presence and unfortunately won’t find many fans among those looking for gin.

People who are new to the category or who have come-of-age drinking syrupy flavored vodkas may find Whitley Neill Rhubarb and Ginger Gin a welcome entry into the world of gin. Everyone else is encouraged to exercise caution and know what they’re getting into before buying this high proof gin liqueur.