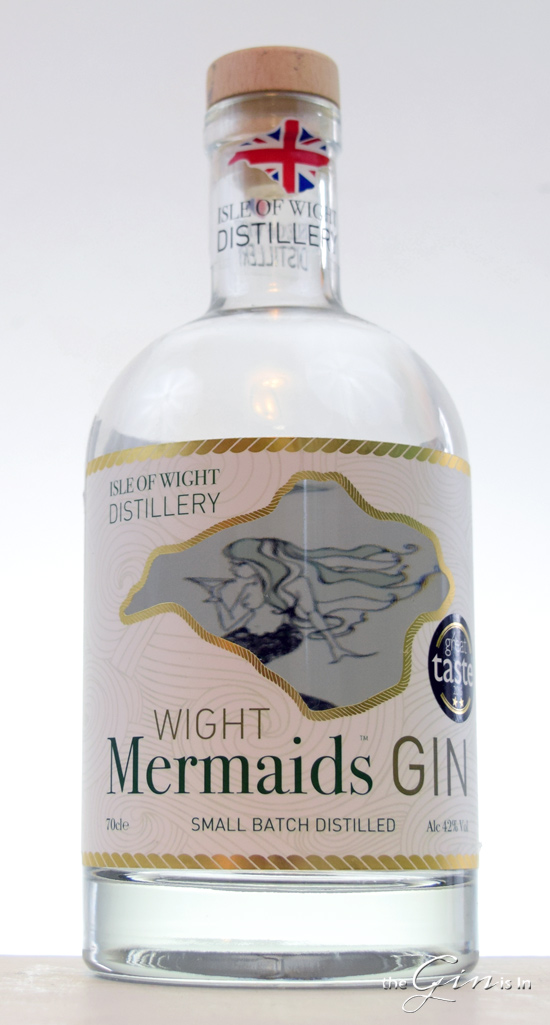 Isle of Wight Distillery’s Wight Mermaids Gin boasts local coriander— the first commercial coriander operation in England. Mermaids Gin also boasts local samphire— from a secret source on the sunny side of the Isle. And Local hops too. Don’t forget the hops. Something you might expect when one of your founders, Xavier Baker, hailed from the brewing world. Certainly not just any hops, but a geeky kind of hop. Boadicea Hops are relatively mild, aphid resistant, and perfect for your stereotypical British hedgerow. Maybe grow some sloes in those hedgerows as well?

Local in much of the core concept, Wight Mermaids Gin steeps the botanicals for 24 hours before distillation. Afterwards it’s rested for a week.

Wight Mermaids Gin begins with a relatively traditional nose. Green juniper at the fore with coriander and angelica; some hints of bright grassy hops and seaweed as well.

The palate is surprisingly more peppery at first. Coriander, Grains of paradise and black peppercorn ease into a mid-palate that becomes surprisingly bright with a hoppy greenness. The finish still has some of the early peppery notes, but this time with a tinge of leafy green and licorice.

The finish is long in terms of warmth, though the flavors are prone to fade a bit before the warmth. It’s cozy on the back of the palate. Mermaids Gin seems fitting to warm the heart on a cold winter night.

Despite the hoppy flourish and the peppery notes, classic gin fans will find some pleasant traditional gin notes here.

[added note: I find that as I drink additional sips, the coriander effect seems to build and build, multiplying itself each time. After several sips, I have much stronger hints of linalool and coriander on the edges of the palate.]

Lovely in a Gin and Tonic, the tonic seems to settle some of the pepperiness into a warm, generally juniper led drink. I quite enjoyed it.

Additionally, I tried Wight Mermaids Gin in a Martini and found that the lovely wormwood notes married beautifully with the bitter humulene flourishes in the hops. Green notes abound, it’s earthy, summery, and alive. As if a grassy field soaked by rain. Lots of complexity here, and quite nice.

I find that in terms of general mixing, warmth seems to bring out the coriander size of Wight Mermaids Gin while ice and cold seems to amplify the spice and juniper sides. A room temperature Negroni* without added ice has an interesting coriander dominated spice effect; where as one stirred and served up is slightly more spicy.

I thought Mermaids Gin worked better mixing with spiced aperitifs and liqueurs. Try it in an Alaska Cocktail. Or better yet, drink like the Queen and have a Dubonnet and Gin. One part gin to two parts Dubonnet (just as the Queen’s recipe prescribes). I know the Queen prefers Gordon’s Gin but I might humbly suggest if she wants a really good alternative, Wight Mermaids Gin works wonders here.

Like many early American craft gins, Isle of Wight Distillery opts to make coriander the star. I might humbly suggest that fans of gins like McCormick Gin or Fleischmann’s Gin would find Mermaids Gin to be right up their alley.

Others will find it to be a gently spice forward contemporary style gin that doesn’t stray too far from it’s more traditional roots. It’s a good gin for mixing and good for sipping neat. Mermaids Gin is for more than just mermaids.