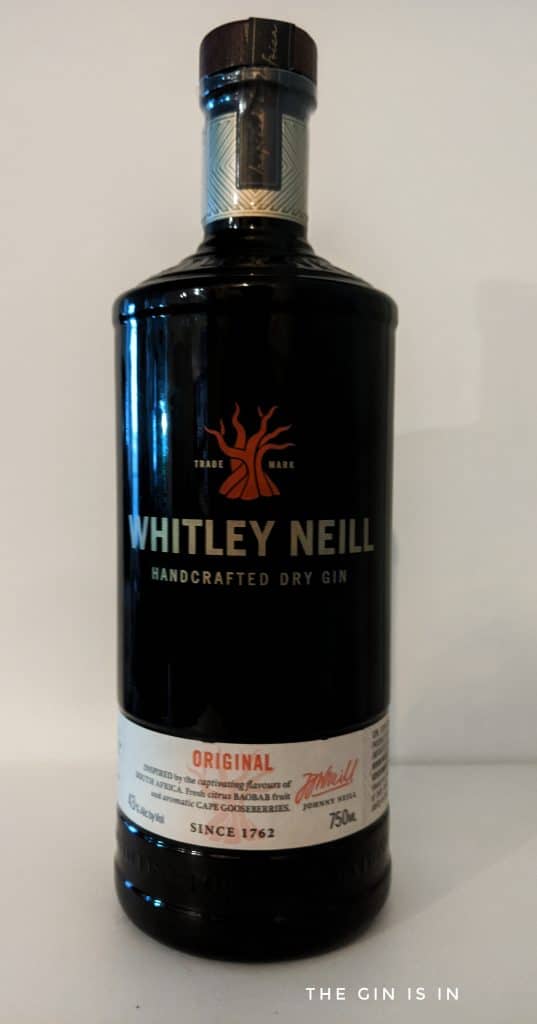 Whitley Neill Gin, the brainchild of 8th generation distiller Johnny Neill, has recently made it’s way to the United States. It was picked up by importer M.S. Walker.

Gin fans in the U.K. may find this quaint. Whitley Neill launched way back in 2005. Before South African Gins using South African botanicals were an everyday thing, Neill was inspired by South Africa’s botanical bounty. Signature botanicals include baobab fruit and cape gooseberries.

Beyond that Whitley Neill Gin is distilled on a century old copper pot still and other than the two signature botanicals, the bill is pretty standard. It’s distilled on a base of grain spirit and bottled at 43% ABV.

Lots of juniper up front— this may be surprising to people who know Whitley Neill primarily from their syrupy, flavored gins— but there’s an element of the nose that reads as a bit classic. The lemon is vivid and candied (I only said a bit!) with a strong lemon leaf and oil facet.

Sipped, Whitley Neill shows a bit more of its spice-forward side.  Tart lemon zest, bitter orange zest and a vague spicy character that’s hard to place specifically. It has hints of cubeb pepper, cardamom, and creamy cassia, while being none of those clearly.  The spice notes combine to produce a novel accord.

The gin has a nice pleasant mouthfeel and the finish brings back some of that juniper that was present on the nose.

Whitley Neill has a contemporary style palate buoyed by a classic nose. As a Martini the juniper dominates the nose but is nearly absent on the palate— a tad misleading.

The spice notes and juniper both shine through in an Equal Parts Negroni. The citrus character lends it nicely to being paired with fresh citrus. Try the 20th Century Cocktail, Tom Collins, or Gin Rickey.

Overall bartenders will find that Whitley Neill Gin makes a pretty consistent mixing gin that while contemporary reads to most consumers as gin.

South African distilled gins have taken the reins, and in terms of celebrating their botanical heritage— Whitley Neill Gin is a quaint callback to when gin was still in its Eurocentric phase.

However, as a gin, Whitley Neill still shows its stuff— it has a contemporary style flare while still retaining a lot of juniper, coriander and citrus character. It’s unmistakably a gin.

But further, the U.S. gets a rare treat— a gin that preceded the Gin Renaissance and has thrived in the past fifteen years. It’s a good gin that works well behind the bar and has a smooth, flavorful character that will appeal to adventurous home drinkers and fans of contemporary style gins that haven’t forgot about juniper.