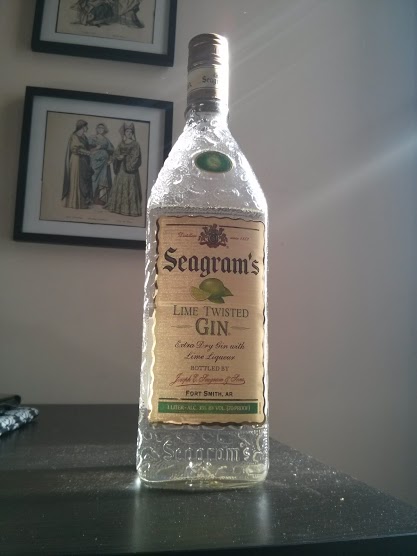 You’re probably familiar with Seagram’s Gin if you’ve ever bought gin in the states. Its rather ubiquitous. It also is the only gin brand I know of which has its hand in ready made drinks, flavored gins, aged gin and regular gin. Seagram’s Gins are designed to cover a whole range of tastes at a rather inexpensive price point. Seagram’s Lime Twisted Gin is among their line of flavored “twisted” gins, of which there are many. [check out all of them here]

First, I want to note what it says on the front of the bottle: “Extra Dry Gin with Lime Liqueur.” Basically they take their main gin offering, and infuse it with a lime liqueur. Interesting, seeing as how as far as I’ve tasted, there are not many lime spirits out there. Lime and gin go together quite naturally, so let’s see how this spirit brings it all together.

Nose is definitely gin like, good deal of citrus and some juniper. Smells a tad sweet, but clearly gin. Tasting Lime Twisted Gin neat it begins with a bit of a gin like edge, citrus, juniper, and angelica. The lime comes in loud and clear about halfway through the tasting. S

Strong with a cloying character, it reads clearly as somewhere between lime rind and lime candies. The finish has a moment where that signature dry note comes through, but the lime note lingers, never quite reaching a crescendo of heat, but one where the sour tang lasts long into finish.

Seagram’s Lime Twisted Gin was designed for mixing. The gin and tonic is a natural fit. With the lime added right into your gin, you don’t need to add lime to your G&T. If you do, you might not even be able to taste much of the citrus over the loud citrus of the gin itself. An okay gin and tonic. It has a sweetness and lime note that’s a bit too overpowering, but it’s not too bad. I can see why people would drink this. Ready built to pour into a tonic with ice, it’s a satisfying G&T that’s easy to drink.

Martini and beyond is where this sort of lost of me. I didn’t think the martini added a ton to the picture. The herbal sweetness and dryness was lost in a torrent of lime. It was certainly easy to drink- Seagram’s Lime Twisted Gin is only 70 proof. But overall, I have to confess, I preferred the gin neat to the way it mixed with the Vermouth. But the flavor clashes found in the martini were only amplified as you roared through your cocktail cabinet. In a Negroni, the sweet lime note just felt out of place, although it was more subdued than I had initially expected.

You can certainly whisk your way through other cocktails, and I found them to be mostly discordant, as that is not the market Seagram’s gin is going for. It’s aiming to be mixed with lemonade, tonic, sour mix. Not necessarily creme de violette or Campari.

For what it does, Seagram’s Lime Twisted Gin is okay. It makes a decent gin and tonic, that although it may not necessarily be to my taste, it’s not bad in this way. I’d say for the price, it’ll do for a party. But not if you’re going to be inviting any serious gin drinkers. For that I’d suggest looking elsewhere.