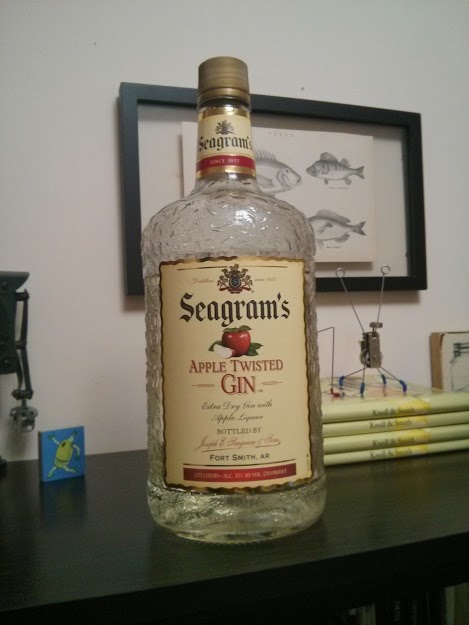 Apple Gin is not a new creation. Once a more common cocktail ingredient, it has since been exiled to the furthest corners of the bar and liquor shelf. Seagram’s Apple Twisted Gin brings it back.

The most common question to would-be-buyers of Apple Twisted Gin is “what on earth do I do with it.” Well hopefully, I’ll help offer a couple of suggestions later on. But in the meantime, let’s get to the tasting notes:

Faint apple juice and faux jolly rancher green apple on the nose. That’s about all. Not a lot of depth, you might confuse it for apple liqueur, of [my first guess], green bottles of apple flavored martini mix.

The taste of Apple Twisted Gin is a bit more of the same, with some juniper tinge on the finish. Sweet apple dominates, hints of citrus and spice on the edges. Doesn’t really push the envelope on the subject. It’s more apple liqueur. Reads as “fake,” which I think hurts it a bit in terms of what you can do with it.

With tonic its palatable, but Apple Twisted Gin is stuck in artificial flavor rut. The bitterness helps quell the fake apple taste a tad, but not enough to make folks who turned their up at the nose to come back around again. I’ve often seen the suggestion of using it as a mixer with ginger ale. It’s certainly very drinkable, but I don’t think it really goes far enough to balance the apple flavor. For that, we need some drinks.

I mixed with with some St. Germain Elderflower Liqueur, about 2 parts gin to 1 part St. Germain. Not too bad, the Elderflower does take over the taste, but you get these nice apple notes in the background, and oddly, it emphasizes the iota of a juniper in here.

I tried a martini as well, but came away unimpressed. The martini, I actually think the herbs of the Vermouth play nicely with a note like the apple, but it still just kind of feels like cough drops and jolly ranchers.

I will give passing marks to the Apple Negroni as well. Interesting, with Campari and Vermouth dominating most of the palate, but the apple creeps on the edges of the finish, surprisingly subtle. Notes of almost baked apple-raspberry pie here. Nice.

Cloying fake apple, but really the only apple flavored gin out there. I wish Apple Twisted Gin was more authentic [to the taste of apples] or had a tad more juniper in it. Likely more appealing to the pour with a mixer crowd than the cocktail crowd.