Hearkening back to the Barrel Aged Gin tasting a few weeks ago, I’ve become acquainted on a rather intimate level with several quite excellent aged gins.

Roundhouse Spirits of Colorado has created a barrel aged version of their mainline Roundhouse Gin. It has a gorgeous golden brown color, similar to a nice mead, and crystal clear. Imperial comes in at 94 proof [47%] and a message on the front of the bottle says aged in new oak barrels for at least 6 months.” So we know that we have here is an aged gin which is longer aged than most other aged gins out there.

Tasting
The nose is a bit sweet, but overall rather heavy on alcohol. A little bit of caramel, candied orange rinds, and a bit of burn.

Upon tasting neat though it begins rather sweet. Similar to Roundhouse Gin, there’s a floral character here. Primarily chamomile, but a little bit of violet too. The floral rolls kindly into a wave of rich spice. Spicy notes of cloves and nutmeg, hints of roasted allspice and quiet cinnamon. There’s a deep rich earthiness here, a but the oak is rather less prominent than it is in some other gins, which have even been aged less. Rich and warm, I’d say that the overall character reminds me of a slightly burnt fruit pie. Rich and fragrant, full of warmth and spice, but a little bit of heat and burnt citrus. Its good, its smooth and quite drinkable. But unlike some aged gins which I’ve said reflect a certain “whiskey like” character, I can’t say the same for Roundhouse. The character of the chamomile and bright juniper gives it a distinctly “gin-like” feel.

Mixing with Imperial Gin
I think that one of the best ways to test how well an aged gin works as a gin is to mix it up in a classic Negroni. As Roundhouse Gin I felt was excellent in a Negroni, I was anxious to see how Imperial could live up to the high bar set by its peers. 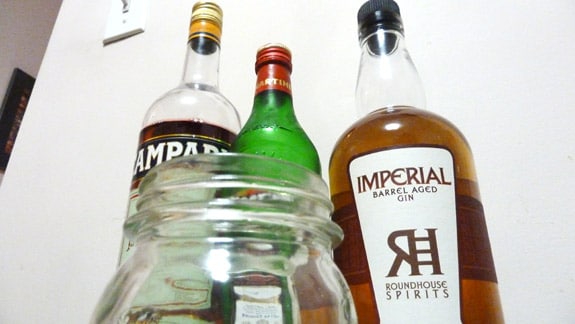 Immediately, I’m struck by how much the chamomile and floral notes shine through even in this Negroni. Warm with a bit of smokiness, but never quite hiding its floral side. The bright juniper comes through in a muted fashion, but this might be one of the most floral Negronis I’ve had. And yet, that smoky earthiness is intoxicating. It pushes the Negroni to a whole new level. 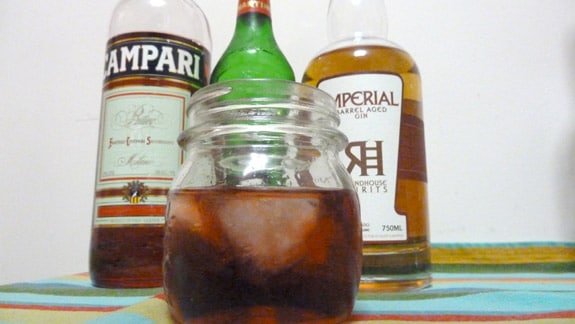 Price: $30/ 750 mL
Origin: [flag code=”US” size=”16″ text=”no”] Colorado, United States
Best consumed: In a Negroni or on the rocks. A fine sipping gin.
Availability: Colorado only, and in very limited quantities
Website: http://roundhousespirits.com/
Rating: An excellent aged gin and a shame that it has only a rather limited availability. Clearly an aged gin that hasn’t forgotten that it is supposed to be a gin first.
[Rating:4/5]