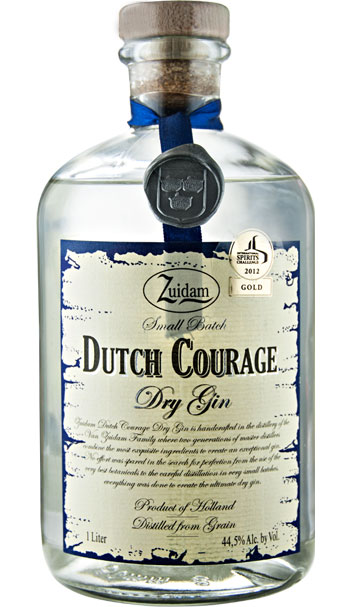 So the name, “Dutch Courage,” is attributed to a possibly apocryphal story about the origin of gin in England. Supposedly when the English were fighting alongside the Dutch in the 20 years war, the Dutch took a swig of a spirit before rushing into battle. This spirit made them bold! Made them powerful! Made them courageous. Hence the name “Dutch Courage.” The stuff they were drinking? Genever. The ancestral spirit which led to the development of gin. And ostensibly— Zuidam Dutch Courage.

Truth be told, the term probably didn’t exist until much later. But nevertheless, good story right?

The nose has juniper, lemon, and a lovely Bombay-Sapphireesqeue note of exotic coriander. The nose is well-rounded with a lovely citrusy undertone. Quite nicely balanced and quite classic. The palate of Zuidam Dutch Courage citrusy at first, but with a rich spicy character, with notes of violet, anise, and pine-note accentuated juniper. Hints of walnut and nutmeg in the late palate, leading into the finish. Moderate in length with a dry clean finish, this is easy drinking, well-balanced classic gin.

Zuidam Dutch Courage seems like a good mixing gin at a good strength as well. I’d try it in a French 75 or Tom Collins.

Bright and classic, with a rich mouth feel, and lots of all of the requisite note for a classic gin. Bottled at a nice strength with a rich smooth character, this is a nice gin— and while Zuidam Dutch Courage may not give you courage, it will give you a good drink.

One thought on “Zuidam Dutch Courage”