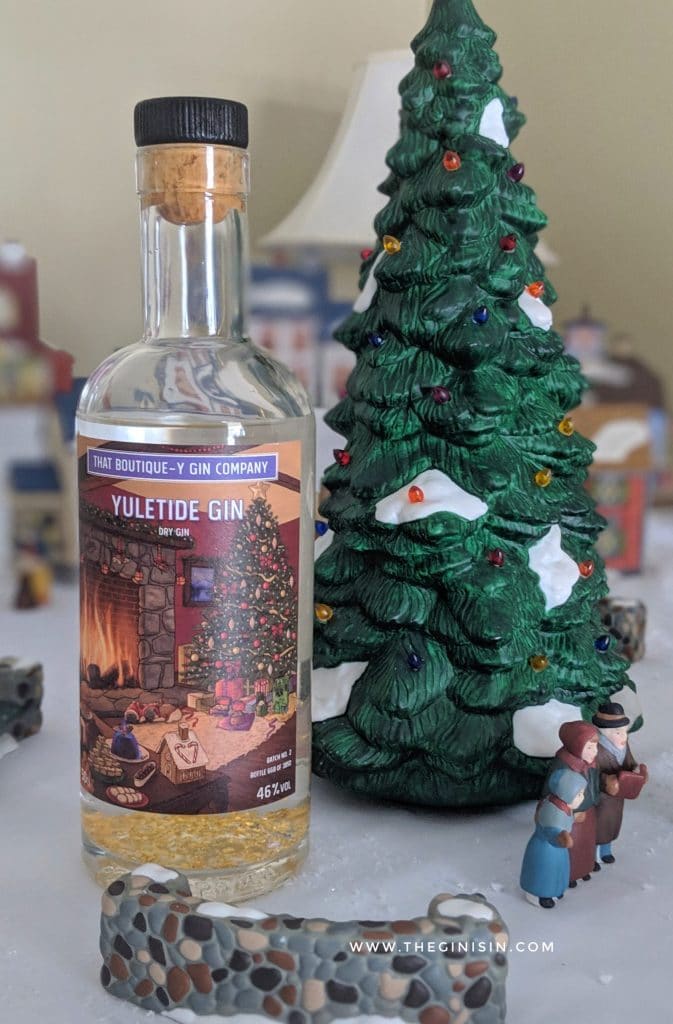 If you’ve ever wondered what would happen if you threw a bunch of baked goods into a still… Yuletide Gin is That Boutique-y Gin Company’s answer.

Not only does it begin with a series of sweet spices that one often associates with the holidays. Allspice, Ginger, Cloves, merely to start. It then adds two kinds of pine needles. Then adds some roasted chestnuts, Christmas pudding, mince pies, Chocolate truffles and much more.

And then those three kings come along. Frankincense, Myrrh and gold flakes. Oh my. Yuletide Gin might be the most over the top gin in That Boutiquey’s Gin Company’s Lineup, and I mean that in the best way possible. it’s fun, like the yuletide season should be.

When first poured, Yuletide Gin has a fairly traditional gin nose. Juniper jumps out at you. But as it sits, I find that some of those more delightful Christmas touches begin to jump forth.

Juniper and cinnamon remain present. But notes of bread puddings, stewed raisins and pumpkin pie spice leap forward. It’s sweet and delightfully holiday-ish. I enjoy how the aroma calls to mind all the aromas of a Christmas cookie spread.

On the palate, Yuletide Gin walks the line between being recognizable as a gin and being a spice bomb. What I mean by that is that juniper does remain present throughout. There’s plenty of it early and late on the palate. It’s generally pine-forward in its expression.

But mid-palate you get cinnamon spice bread, carrot cake rife with raisins. The metaphor on the palate might be that there’s notes of dark spiced rum with a hint of spiced orange.

Yuletide Gin to the finish has a slight musky note. Heavy with angelica root and frankincense, it leaves a remarkably long warmth on the palate. As if the embers of a holiday fire slowly and warmly fizzling out, with a few cinnamon red hots in the air.

If you want a gin to celebrate the season, Yuletide Gin might be one of the most fun options out there. Not only is it a fun celebration of holiday baked goods in gin form, it still maintains enough juniper to appease even those who can be a Grinch about juniper content in gin.