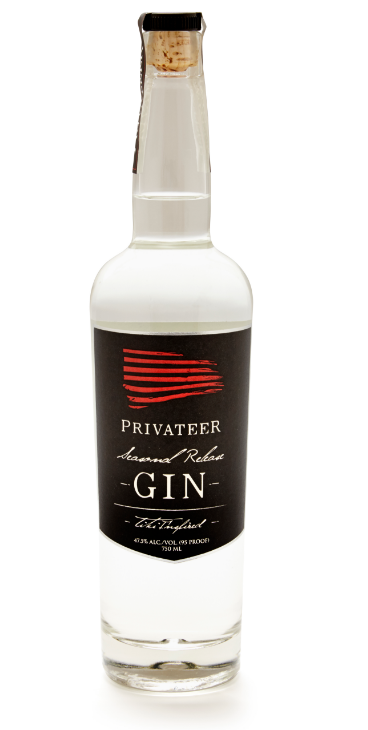 Tiki isn’t often a word you immediately associate with gin; however, to hear that Tiki Gin is distilled by a rum distiller— at least you start to see where the inspiration comes from.

Tiki Gin begins from a base of Privateer’s Silver Reserve Rum. Their rum begins from a base of brown sugar and molasses. Paul Pacult described the flavor as “this opening aroma is juicy, ripe and bakery shop sweet…. Entry is brazenly bittersweet and therefore keenly delicious… [then becomes] bakery shop spicy and fudge-like right through the focused, bittersweet, and lip-smacking aftertaste.” [source]

Gin from a rum distiller isn’t unusual. In fact, fairly good examples have come from rum distillers like Colombia’s Dictador who have two excellent gins based on a cane.

Tiki Gin adds the botanicals for a 36 hour maceration period before being distilled. Tiki Gin rests for 3 months before bottling.

TL;DR: Pineapple and lime on the nose, but the palate brings spice, juniper and a Velvet Falernum finish.

Bright, fruit-forward nose with a ton of pineapple. Tiki Gin has a tropical fruit forward nose— in addition to pineapple there’s a hint of key lime candies and sweet Meyer lemon zest. It’s incredibly bold and contemporary. I have to admit that at first nose Tiki Gin suggests to me more a pineapple vodka than a gin. That is to say, I’m not getting any traditional gin aroma notes, and especially not juniper. It’s reminiscent of That Boutique-y Gin Company’s Pineapple gin—   or perhaps to take it one step further into pineapple— it’s almost like Seagram’s twisted pineapple gin.

The palate is where all of those other botanicals are hiding.

Sweet orange, mango and pineapple early. Tiki Gin’s mid-palate reveals a subtle spice character and a fair amount of pine-forward juniper. Mid-palate it’s actually quite gin-like. Cinnamon and clove notes build in the background as well. Tiki Gin is starting to remind me of a Velvet Falernum with juniper, as almond, ginger, and creamy vanilla undertones begin to evolve.

If I was skeptical of a product called TIki Gin at first— this is where I’m starting to come around.

The finish is fairly warm with a moderate amount of residual heat. The finish is a bit more true to the nose, with citrus, roasted pineapple, lime pie, coriander spice, and an iota of Orgeat.

Tiki GIn is a really weird product. I can see this being as divisive as say Hoxton Gin was upon its initial release.  But one thing is for sure. There’s more juniper and classic gin character in Tiki Gin than there was in Hoxton when it first came out. So Privateer Rum is pushing the boundaries without forgoing its roots entirely.

The sweet fruit notes become a bit overbearing in a Gin and Tonic. It’s almost like mixing a gin with a flavored tonic right from the outset. But I’ll tell you what it is. Tiki Gin and Tonic is light and summery— in addition to being quite accessible. This could be a G&T for someone who is not a gin fan.

As for a Martini, it’s fun albeit unusual. If you’re a Hoxton Martini drinker— this is right up your alley. The dry vermouth goes excellently. Don’t you dare touch the olive. You don’t need a flavor bible* to tell you that pineapple and olives just don’t go together.

If you’re a bartender running a tiki program and you need a gin to exemplify the feeling— this is at least in my top three. It’s nicely done and although it won’t win over fans of classic-style gins, it’s an exciting combination of where gin’s been and where it can be going.

I was expecting to hate Tiki Gin. And I’m so glad I was wrong. Buy at Memorial day and drink it by Labor day**. Cheers to being wrong.

Made possible through the New England Gin Exchange

Special thanks to John at Foodie Pilgrim. Since 2012, John has shared and sourced gins from New England and nearby that we at The Gin is In haven’t tried yet. This gin sample was shared by John, who is also a big fan of gin. So check out his New England Gin Reviews as well.

* Holy shit though— seriously. This might seem like shameless promotion. But I’m not kidding. If you’re a home cook or a distiller, the Flavor Bible is a life changing text. Not for telling you when you’re wrong. But helping you to find creative ways to pair ingredients that you never thought about pairing. I’m amazed going through it how many gin combinations that I’ve said “I would have never guessed that, but it works—” are already in there.

** In the Northern Hemisphere. For my friends in Australia, make Tiki Gin your Christmas tipple.