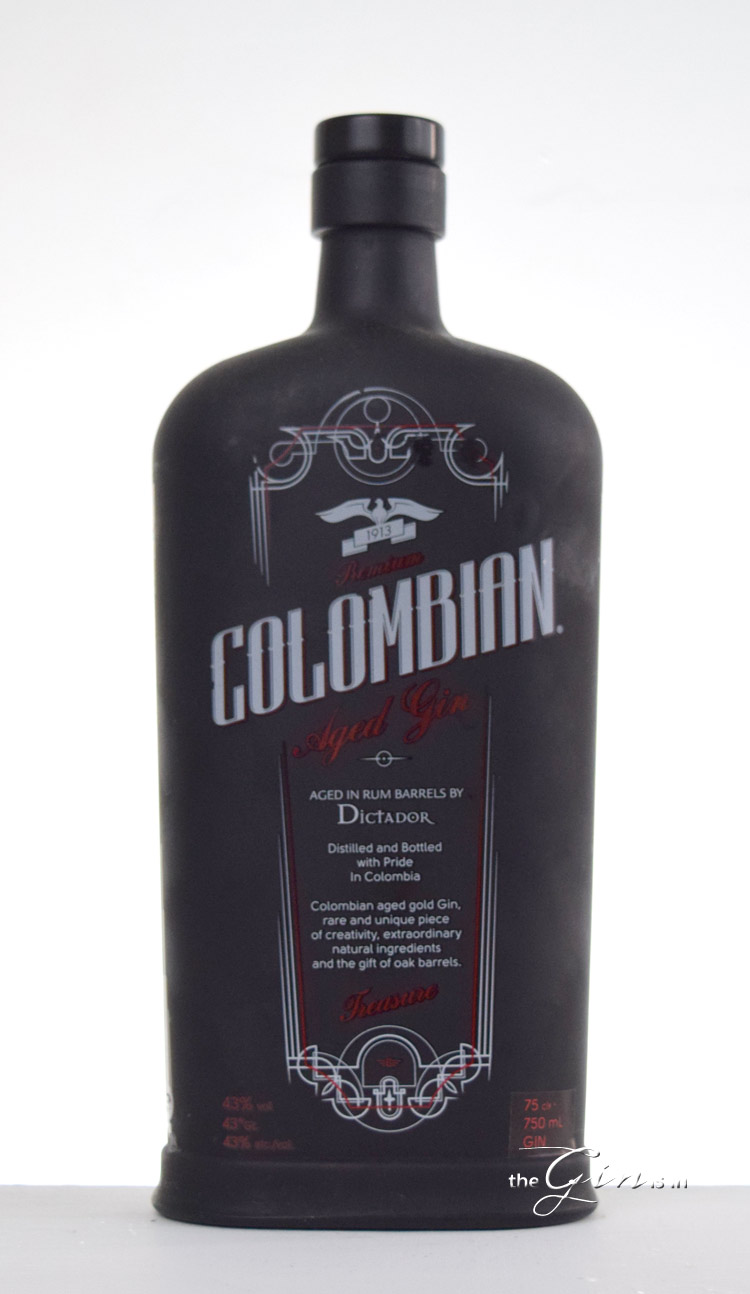 South America is perhaps better known for its rums than for its gins, hence why it should be less of a surprise that the distillery behind Colombian gin is a Rum distillery first, and that their Dictador Treasure is distilled from cane (like Rum). Dictador’s treasure is then aged for 35 weeks in the barrels previously used to hold their rum. As far as the gin part goes, they use a local citrus variety known as the limón mandarina or “Paraguayan Lime.” Citrus enthusiasts describe its taste as having the most essential lime flavor of all citrus fruits. The exterior is green like a lime and the inside is orange, as if a tangerine. Hard to find stateside in their fruit form, the  limón mandarina grows widely in Colombia and is therefore a local botanical touch to their gin, in addition to some more usual botanicals and spices.

Dictador Treasure has a definite goldenrod hue owing to its time in the barrels. The nose is brightly citrus, with candied lemon, tangerine and a hint of bitter orange as well. Largely citrus forward but with some hints of mint and other more savory herbs underneath. Not very gin-like at first whiff.

The palate of Dictador Treasure is largely citrus again, as might be expected on the nose. But this time, there’s sweet orange, red grapefruit, and lots of lemon oil. The lemon becomes the dominant note from mid palate through the finish, with a really sweet character to it. There’s notes of peppercorn and rubbed sage as well, with just a delicate sparkle of juniper near the finish. Overall, it has a lot of character that might suggest a citrus flavored vodka with additional spices coloring in the edges instead of a gin with citrus. The finish is lemon forward with a touch of oak. Medium short in length it fades with very little heat. Incredibly smooth, but surprisingly lacking in some of those vanillin touches that are so prevalent in aged gin. Secondly, despite its close ties with the rum formerly of the barrels it spent so much time in, there’s not much that owes itself to rum either. Although smooth and sippable on its own, I wonder if there’s a couple lost opportunities here to where its Colombian and rum genesis more proudly.

Cocktail wise, the Dictador Treasure is a bit of an odd one. Despite the color of the spirit, it works best as a regular gin than an aged gin. With tonic, the citrus sings and makes a good Gin and Tonic, but I found it to be a little too one note to shine in a Martini and too lacking in complementary notes to really round out some of the more citrus forward drinks like the Tom Collins or Gimlet. In short, I really think its best on its own, and the smoothness of the spirit and gentle sweetness really work well to make that your go-to with this gin. I think this aged gin will appeal more to fans of citrus forward contemporary gins, and less so those who are looking for a strong aged component. Despite 35 weeks, it has less of the barrel character compared to other aged gins. Good on its own, buy it for how it tastes on its own, and not for mixing. A good experiment that shows that gin is no longer the privileged domain of just Europe and North America.

Lots and lots of lovely citrus, it seems more desirous of being a good citrus flavored spirit than a gin or the product of a well known rum distillery. That being said, despite being rather one note, fans of citrus-forward contemporary gin will find a lot to like here. Clean, smooth palate and a unique, but citrus dominated flavor make it incredibly easy to sip just on its own, which is really how I enjoy it best. Though I would love a bit more juniper or a bit more barrel character, it’s an intriguing variation that is worth a closer look if the aforementioned style is in your wheelhouse.

One thought on “Dictador Treasure”