Despite primarily being a rum distillery, former president of Dictador was fascinated by gin. As the story goes Dario Parra crafted his own recipe buoyed by inspiration from his trips to London. Years later— likely seeing the gap in the market— or the wild success of gin around the world— Dictador put his recipe into production. 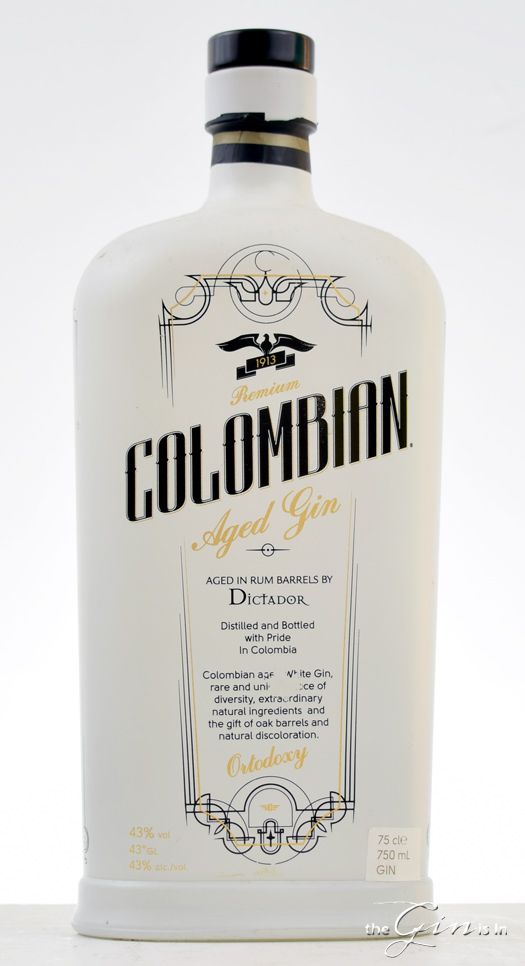 what you might expect from a rum distillery. Ortodoxy’s base spirit is cane. Each botanical is distilled separately before being blended. Then the resultant gin is aged in barrels. As Dictador is a rum distillery, their gin is stored in oak barrels formerly used to hold their rum. Ortodoxy spends thirty-five weeks in wood, before being filtered until completely crystal clear.

The nose has a heavy angelica note in the juniper/angelica part of the aroma, further a slight hint of lemon balm and melissa.

Dictador’s Ortodoxy isn’t strictly orthodox, but it’s close. Ortodoxy has pleasant juniper notes all throughout the taste. Mid-palate there’s a lemon rind note and lots of warm earthy baking spice. I get angelica, coriander, cardamom, and a fruity tinge giving it a slight blueberry pie note. The other thing I noticed was the gorgeous mouthfeel. Ortodoxy has a notably oily and thick character to it.

Dictador’s Ortodoxy Colombian Aged Gin finishes with a peppery and gingery lift, along with some bitter orange rind and resiny juniper berries. The finish reminds me white rum, with a mild yet distinctive flavor of distilled cane.

The overall flavor profile is nicely blended. Juniper stars here, but Ortodoxy blends its influences smartly. The age and then filter step is unusual, but the texture and subtle warmth suggest that Dictador may be on to something here.

It’s sterling with tonic water. So definitely try the Gin and Tonic. Fans of classic style gins will like the way that juniper is at the front. Although the other accents may be contemporary, they support and complement well.

Another way I enjoyed Dictador’s Ortodoxy was in a Martini. The texture is what comes to mind first and foremost, but Ortodoxy also combines nicely with Vermouth. I prefer a spicy one to an intense wormwood one with this gin; however, I don’t think you’ll be disappointed either way.

Colombian gin is far from a gimmick. Dictador started from what Colombia has, melded it with some overseas influence and came up with a gin which is classic— but in a very South American sense.

I like the mouthfeel and juniper profile. The spice accents are nicely integrated and it overall I think does enough to warrant being on both classic and contemporary gin drinkers’ lists.