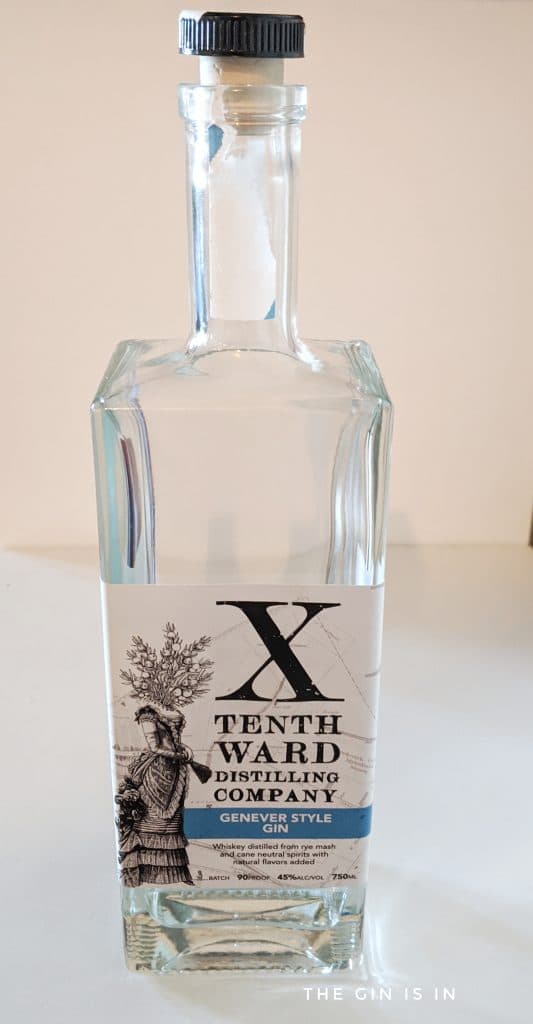 Tenth Ward Distilling Company Genever Style Gin has a base spirit that is distilled from a combination of rye, barley and cane. Unusual vapor indused botanicals pay tribute to Maryland culinary culture. Chicory, a common addition to coffee in the American South is said to offset the bitterness of coffee beans.  In fact, Tenth Ward goes so far down the genever angle that they describe it as “Oude-style” on the side of the bottle.

Since genever is a protected spirit category that can only be distilled in parts of Germany, France, Belgium and the Netherlands, Tenth Ward Distilling Company Genever Style Gin can’t be a true genever. But plenty about the process and flavor hearkens back to genever.

As you might expect from a holland/genever-style gin, the base spirit adds a lot of character to the palate. It’s clean with a bright malty character and no mushroom or musty off notes (which barley based spirits sometimes can have).

Almost as if disconnected from the rest of the notes, there’s a really late hint of cinnamon pear jam— likely some persimmon— coming through. I had to taste it a few times to confirm I wasn’t crazy. But some heavy volatiles, likely released by being warmed in the mouth and throat, come through late for a beautiful surprise.

Genever-style gins tend to benefit from being treated as if they’re their own thing (not just an ordinary gin). Tenth Ward Distilling Company Genever Style Gin is no exception.

Personally I prefer it simply neat because of the long unfolding palate. However, it works well in a Negroni or Martinez in addition to pairing nicely with lemons and lemon juice.

Overall, Tenth Ward Distilling Company Genever Style Gin is a home run. It knows what it is, tells you what it is, and does it so well that it will inspire  you to want to try more like it.