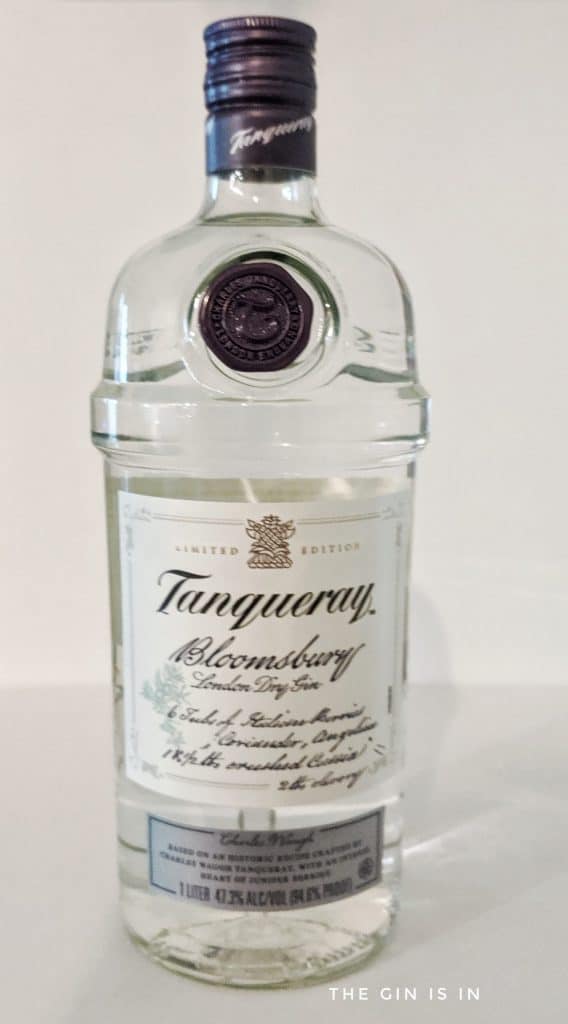 Tanqueray Bloomsbury Gin is a limited edition gin. Only 100,000 bottles were made.  The first bottles hit the market in July 2015 and the recipe is said to have been based off one written by Charles Waugh Tanqueray.

The recipe itself seems to be pictured on the front of the bottle. My guess based on the ratios and the measurements— it’s unlikely to be the true measure.

For example, it specifies “tubs” as a unit of measure. British law defined a tub as “84 pounds.” So that’s 500 pounds of juniper berries right there. Tablespoons were part of the British apothecary system of measure during the 19th century. It’s likely that the Tanquerays would have been aware of it and using it. However, tbs. was generally a liquid measure in that period, equal to about 4 drams/half an ounce. Romantic sure, but you’re unlikely to duplicate Tanqueray Bloomsbury Gin based on the label alone.

Most intriguing of the ingredients to me is Winter Savory. While most gins that use savory tend towards the “summer” varietal, which is a bit more “thyme-like.”The winter savory in Tanqueray Bloomsbury Gin is more piney and terpey. Some might even say it has a juniper-like edge to it.

The nose is quite beautiful right from the bottle. There’s a heavy angelica edge to the juniper dominated nose. Coriander lends a citrusy earthiness to it. Tanqueray Bloomsbury Gin smells clean and classic— although less classic than Tanqueray’s London Dry Gin.

To the palate, Tanqueray Bloomsbury Gin is juniper and angelica led; however, it has a softness and roundness not present in their standard offering.

Pine and juniper lead early. Coriander adds depth mid-palate. While the savory is subtle, cassia adds an earthy hue especially as the gin begins the get towards its finish.

Although a limited edition gin, Tanqueray Bloomsbury Gin has a lot of versatility as a mixing gin. I thought it was at its best in a fairly Dry Martini or Gibson.

I think citrus is a nice complement to its earthy and juniper palate. A little bit of lemon especially lifts that citrus hint on the finish. Try Tanqueray Bloomsbury Gin in a Tom Collins.

Although a rather simple gin, Tanqueray Bloomsbury Gin achieves depth and roundness from a small number of ingredients. Fans of juniper-forward gins who maybe prefer the modern juniper-led gins like Sipsmith to Tanqueray— will find this one a welcome addition to their home liquor cabinet.

Overall, it’s good but not anything utterly remarkable or unusual to justify the rather high price. It’s a good product in its own right, even if its not as stand out as Malacca or their Old Tom.