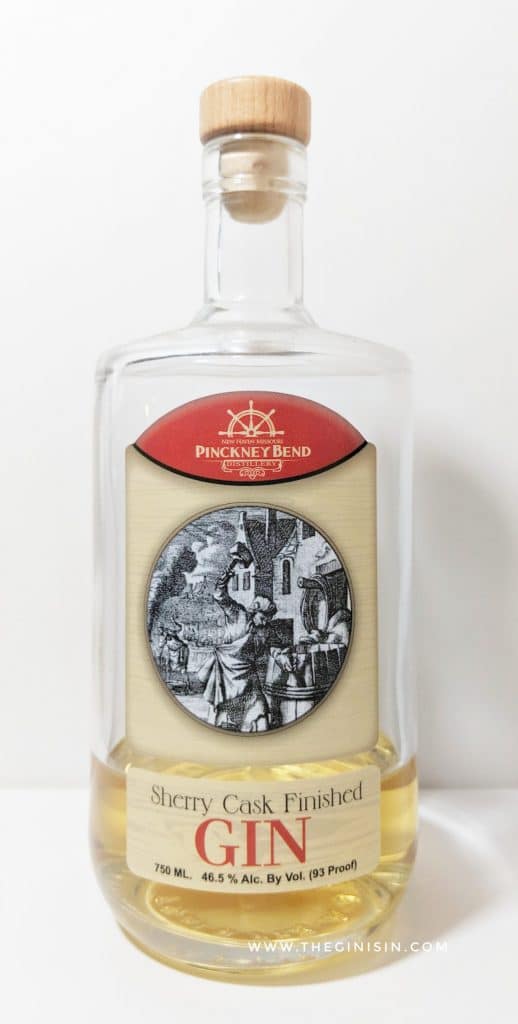 Pinckney Bend Sherry Cask Finished Gin takes a concept that was once common— in fact Booth’s Finest Dry Gin was “mellowed” in Sherry Casks in the first half of the twentieth century. Pinckney Bend takes their flagship gin and aged in a barrel formerly used to house Oloroso sherry.

This is one of two aged gins that the distillery produces.

Light sherry notes are rife in the top. Beneath that there’s hints of grassy oak, citrus zest and coriander with a hint of juniper resin as well. Overall, it has a strong gin-like character to the nose.

What really excites me is that despite using a used barrel, Pinckney Bend Sherry Cask Finished Gin manages some of those creamy vanilla notes that you generally get more of from a new barrel. Secondly, it avoids some of the oxidized wine notes that other aged gins get when using former wine barrels. In that regard, and the fact that it manages to catch some of the best notes of Oloroso Sherry, Pinckney Bend Sherry Cask Finished Gin is a stirring success.

This gin is best suited sipped on its own. The strong sherry presence is assertive and comes through strongly in any mixed drink with it. Even treated as an aged gin in mixing— the sherry note doesn’t work. The Negroni reminded me of a Sherry Negroni, but the Oloroso is even the wrong note for that.

Suffice to say, this is a gin that I just didn’t enjoy mixed, but thoroughly enjoyed on its own.

This is a gin that you buy because you want to sip it neat or on the rocks.

Hats off to the distillers and team at Pinckney Bend Distillery. They took an unforgiving barrel and created a combination that truly married the best of both worlds.

Sadly, this was a limited edition product and is not part of their core range. But if you do see one out there still, it’s worth checking out if you’re a fan of aged gins and sherry.

As you can see, there’s not much left, but this is a cherished remainder in my collection.