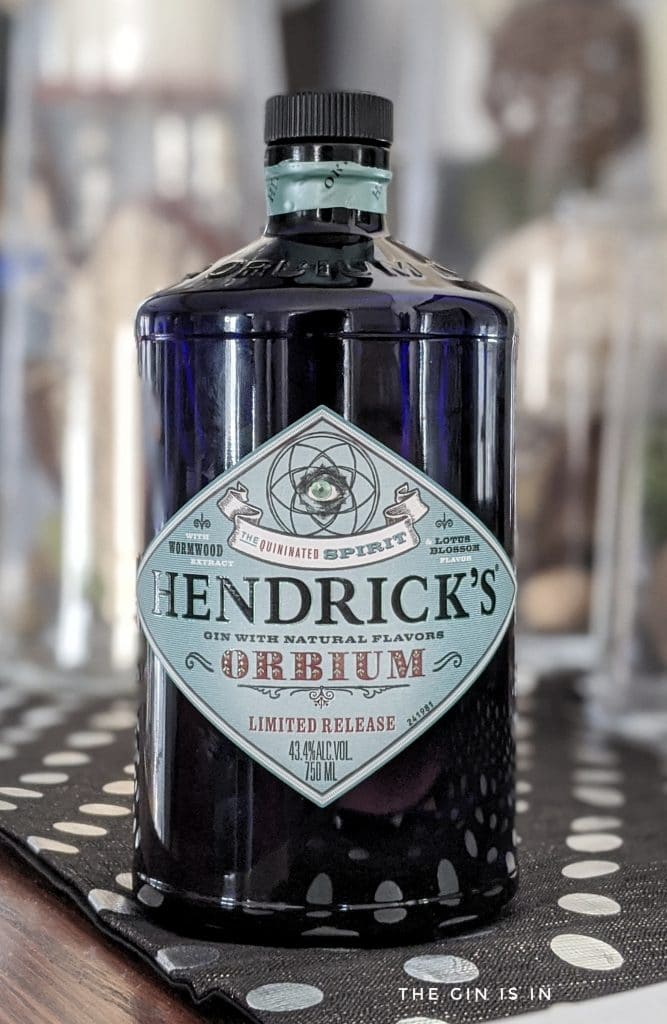 Hendrick’s Orbium Gin is a limited edition expression based on their famous flagship Hendrick’s Gin. The base spirit and botanical bill is identical to Hendrick’s. Orbium also includes the cucumber and rose essences which are added after distillation. Three new post-distillation essences are added:

Lotus Blossom has a floral flavor with facets of both anise and rose. Wormwood is one of the primary flavoring botanicals in absinthes and Vermouth, with a bitter herbal flavor profile. Finally quinine, which all gin and tonic drinkers are familiar with, comes from the bark of a South American tree and found its way into European consciousness largely because of its prowess as an anti-Malarial. But that distinctive bitter flavor made it a popular in the spirits world as the ingredient began to appear in a number of amaros and bitters during the 19th century and beyond.

Quininated spirits are rare in the 21st century, but the designation used to indicate that a distilled spirit may have been intended to have a medicinal use (in addition to a clear and obvious recreational use).

Similar to both the Hendrick’s Gin standard-bearer and their other seasonal offering Hendrick’s Midsummer, Orbium Gin is exceedingly floral at first nose. Rose, Lotus Blossom and some earthy background notes immediately distinguish it as part of the Hendrick’s Gin Family.

Sweet citrus notes and subtle chamomile early. Wormwood comes on mid-palate and for me is the dominant bittering agent present here. It’s not wormwood in the way that it comes through in a distilled product. It’s much more like wormwood-macerated. The bitterness is green, distinctive, and dries out the palate in a way that I don’t normally find quinine does. Quinine comes on most strongly on the finish, with a slight metallic tinge.

The wormwood amplifies the quinine note, adding bitterness to the mid-palate where quinine generally doesn’t add a whole lot (at least on its own, if it was cinchona you would get more woody and earthy notes).

Orbium Gin is a strange gin, at least as far as mixing with it goes. The bitterness can take a cocktail over. Depending on the drink this is a great -or- undesirable things.

Let’s start with the good. I love Orbium Gin in a gin and tonic. It pairs perfectly with Vermouth and is complex, floral and quite awesome for Martini applications. The bitterness also amplifies a Negroni to unexpected heights. If Campari isn’t bitter enough for you, but you don’t want to mess with the “scared ratio,” Orbium Gin is the best Negroni gin of 2019.

Now for the not-so-great. I’d advise bartenders against pairing it with floral, fruity, or dessert-like applications.

Hendrick’s Orbium Gin is a more bitter version AND more floral version of Hendrick’s Gin. In other words, you’ve probably already made up your mind about Orbium.

However, for those who do like bitter and do like Hendrick’s– Orbium Gin is an excellent and delightful contemporary expression that may not make for a flexible mixing gin, but is great and what it does– and worth seeking out for fans of the bitter and the floral.