Years ago. No, eons ago. We reviewed the Westbourne Strength variant of Martin Miller’s gin, a spicier, warmer, stronger version of their original. The original has a dear place in my heart. It’s one of the gins that ignited the fire in me for the world of gin. It pushed the boundaries just enough to stand out from everything else behind the bar  at that time, but it stayed within familiar confines enough to be clearly and readily identifiable as gin. Martin Miller’s gin is one of the forebearers of today’s contemporary style. Keep in mind, that this gin was on shelves back in 1999. The historical context is as important as the taste in understanding what this gin is and what it has meant to the gin world.

Distilled in two separate batches, the team behind Martin Miller’s gin separates the citrus from the other botanicals in order to attend to them separately. Pot distilled at the famous Langley’s Distillery, the real story isn’t the first where [England], but where it goes from there: to Iceland. Where the distillate is diluted with fresh Icelandic water, which purportedly adds fewer impurities (in parts per million) than water found anywhere else in the world. Whether those impurities are found in quantities above the human threshold for detection are left* up for debate; but the Iceland mythos is an important part of the story that Martin Miller’s Gin tells from the water inside to the designs of the bottles.

The gin uses a relatively straightforward list of botanicals: juniper, coriander, angelica, orris, cassia, cinnamon, licorice, nutmeg, iris, and Seville orange. Although not officially disclosed, drinkers have long suspected some cucumber essence added post-distillation, owing to the bright cucumber taste present [more on that in a second], but officially nothing is stated as to that regard. The only hint we have is that the bottles have undergone a re-design in the past decade which removed the words “London Dry Gin” from the bottle. [old vs new]. Since we know the term “London Dry” prohibits the addition of flavors/sweetening above a microscopic signing amount, this may be a suggestion that the hypothesis is not far off. But for now, just know there is indeed an unmistakable cucumber note and no reference to cucumber in the botanical list.

Bitter orange zest, fresh juniper an a slight hint of licorice and gentle spice behind it. It’s quite classic in profile with a lot of juniper fortifying it at first glance. When they speak of the specific method for getting the most out of their citrus, it’s fairly evident here that the work has paid off. The orange notes are the star.

On the palate, there’s more of that same orange zest. Nicely expressed, and not overwhelming though it is dominant. Brisk, pine forward juniper comes forward but so does a smooth, sedate vegetal character that is clearly cucumber, but also oddly sweet and clear. It doesn’t taste like distilled cucumber. It’s as if there’s a fresh cut cucumber right next to you. These notes stick with you as the finish comes on with some pepperiness to it: hints of coriander and cassia perhaps with angelica coming through towards the backend. Finish is quite long and only gently warm.

I think this is one fantastic gin, and it still holds up today IMHO. First, it makes such a good Gin and Tonic, and I’m not sure a gin can endure the way this has and become a staple behind so many bars without doing that well. My money’s still on the Westbourne as the superior spirit in all mixing uses, but that’s not to say that doesn’t hold it own. The Martini is really nice as well, though I don’t think it comes through as strongly in things like the Negroni or a Corpse Reviver #2. I think the only thing wrong with this spirit might be that we have the Westbourne Strength to compare it to.

Seriously, still one of the best, it holds up even nearly two decades later. Martin Miller’s gin is a new classic of this era and I still love it for what it is. Though I’d probably buy the Westbourne first if I had a choice between the two, I’d buy the classic 40% ABV Martin Miller’s over a very many of the gins out there today. Highly recommended. 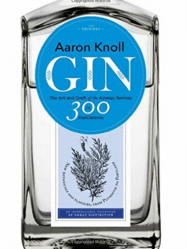 *Much literature about brewing discusses the impact of free ions in water and how they affect the brewing process, though many water scientists have suggested that in some cases the differences between water sources in terms of dissolved solids are below the level of human detection. Just some water for thought.

Also, have I mentioned that Martin Miller’s Gin in featured alongside 310 other gins in my recent book Gin: the Art and Craft or the Artisan Revival, now available online and at local bookstores everywhere?