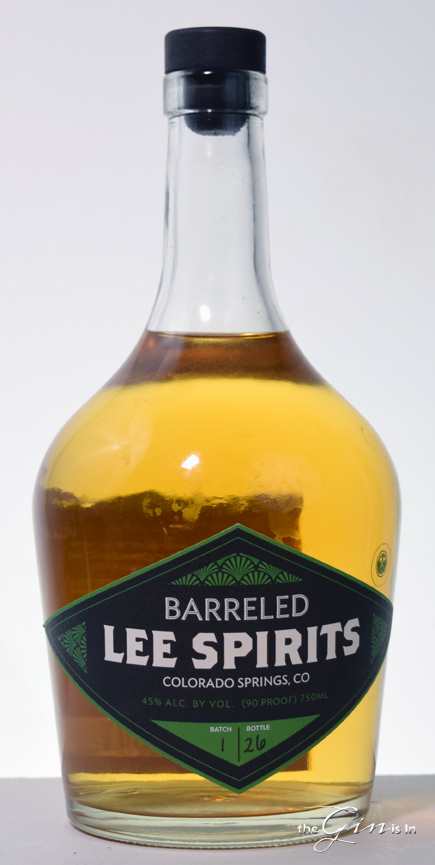 Lee Spirits Co. in Colorado Springs continue to distill an impressive array of gins ranging from a contemporary styled dry gin to bold flavors like lavender and cocoa. Lee Spirits Barreled Gin is aged in used bourbon barrels, with no specific aged stated. The color is slightly past the middle in terms of hues in aged gin. As it’s an almost cider tinged goldenrod, it suggests a barrel time between four and six months (this is a total guesstimate based on experience, it can vary based on environmental conditions and the type of bourbon that was in the barrels).

We’re reviewing Batch 1, and please note that among aged gins there is often more significant variances from batch to batch than among batches of unaged gins.

Gentle, wood touched spice on the nose. Orange rind, hints of cork, pine wood, and oak, with juniper and a touch of cardamom. The pine note I got earlier on evolves into a most resiny rosemary and pine bough note. Less vanillin than other aged gins. A nice gin character emerges that isn’t too woody.

The palate of Lee Spirits Barreled Gin is creamy and luscious, with a thick viscous-vanilla-at-first, but then dried rosemary, lemon rind, and an evolving woody backend that brings juniper and oak on the edges of the palate. Long, woody finish with hints of dark crystallized honey and a bit of bitter orange. Nice, pleasant dryness and a long, residual warmth. Quite nice.

I like the nice citrus lift that Lee Spirits Barreled Gin has and I think because of that it lends itself nicely to some slightly more traditional gin uses: the Negroni for example I thought was worthy of note, even at equal parts. A lovely, oak tinged vanillin adds an unusual complexity to a cocktail you’ve had many times. I also really enjoyed the Old Fashioned. I mixed it up with a dash of vanilla bean infused sugar, garnished with a cherry and orange rind. It’s remarkable how with that orange zest on the rim, the citrus notes from the gin seem to burst out of the wood and onto the palate.

Lee Spirits Barreled Gin is a lovely, nicely balanced Barrel aged gin that I think spent the right amount of time in the barrel. It has more botanical complexity and slightly less vanillin and wood than other aged gins; however, as far as my palate is concerned it’s more about balance and attention to detail. This gin tastes intentional, right down to the interplay of wood and citrus; spice, juniper and oak.

Fans of barrel aged gin will be pleased with the result here; new drinkers who are looking to get acquainted with the style are well advised to take a look at this gin as a good starting point. Sip in a Negroni and work your way up to on the rocks.