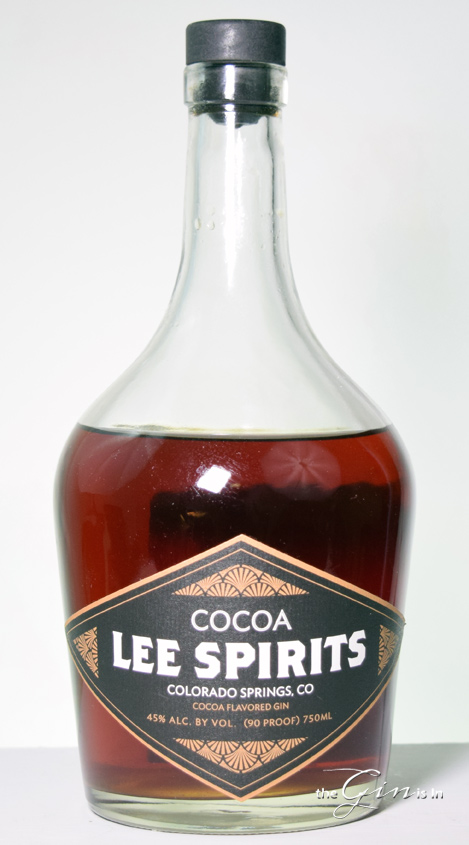 One of the current hot trends in the world of gin are “flavored gins,” which expand a distillery’s line. Rather than going all in on a contemporary gin that emphasizes Cocoa in Lee Spirits Cocoa Flavored Gin. Lee Spirits Co. (now with a roster of at least four gins, including two flavored variations) macerates cocoa nibs in a specifically distilled gin for seven days before filtering and bottling. The result is an emphatically “cocoa” tinted spirit that looks as chocolaty as the name suggests.

Both cocoa and some gin notes on the nose. Heavier on the cocoa, the nose is strong with hints of very dark chocolate and cocoa powder, the gin imparts a hint of cardamom and orange. I’m not sure I would undoubtedly have known this was a gin at first whiff. I think it has a nose that calls to mind an orange chocolate liqueur. Deceptive even more so as the nose betrays none of the 90 proof spirit within.

The palate of Lee Spirits Cocoa Flavored Gin is less heavy with cocoa than you might have initially thought. A pleasant burst of juniper and citrus zest, orange chocolate candy, and a touch of cardamom. Mid-palate, the chocolate begins to takeover, with an almost silky milk chocolate mouth feel. The finish ends with both a pleasant radiating gin warmth but a slightly bitter note of unsweetened chocolate as well.

On the palate, the cocoa is strong and it tastes at times more of very pure unsweetened chocolate. I wonder if perhaps a slight tweak with the addition of vanilla during the maceration phase could round it out and add some perceived sweetness to the cocoa notes (without sweetening of course) while kind of bridging the gap between the flavorful gin and the rich cocoa notes. That being said, it’s quite memorable on its own and eminently drinkable as is. Even non-gin fans may want to sip this neat (notice how much of the bottle is gone, the Gin Wife is quite a fan) which to gin aficionados, this may be a mixed blessing and a sign of which direction this flavored gin veers.

Lee Spirits Cocoa Flavored Gin is built for a limited range of uses. It doesn’t work in a Gin and Tonic, Gimlet, or really mix well with Vermouth at all. I don’t think I could recommend a Martini; however, if you’re buying this gin, you should know what you’re getting into. This isn’t meant to be a versatile bar ingredient, but instead the showstopper in a specifically created cocktail.

I knew that pairing this with cream would be a ideal mix. I love the way the creamy silkiness of the Gin Alexander brings it together, and adds that perceived vanilla note. It almost reminds me of a dark chocolate gelato. Other cream drinks, particularly those with light flavors or lots of citrus (I’m looking at you Ramos Gin Fizz) don’t quite work.

Overall, my favorite way to have this was in the aforementioned dessert cocktail or simple done Old Fashioned style with a dash of sugar and some spicy bitters (but orange works really well too).

There’s nothing else quite like it. This is by far the best cocoa infused gin that I’ve had. Dare I say— drinkers of chocolate vodka— or perhaps bartenders at dessert cocktail bars (I think there’s about a million bars that serve Bailey’s laced creamy dessert cocktails with sprinkles on the edge of an 8 oz. Martini type class— you know the type) should absolutely pick up this gin and give it a try.

Flavorwise, I think that it benefits from a touch of sweetening to cut the bitter cocoa notes and some lighter notes like vanilla or citrus to balance it out; however, that being said I (and the gin wife) both quite enjoy this.

Fans of all types of gin should approach with full awareness that this gin is perhaps a category unto itself and has a very specific and limited range of uses. If you don’t like chocolate, this isn’t for you. But if you do… grab yourself some simple syrup and give this a try. Recommended in its category.