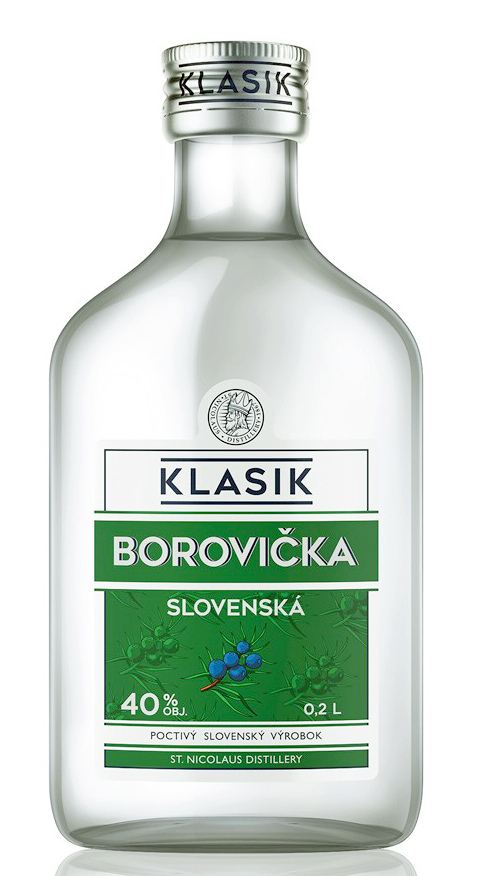 The St. Nicolaus Distillery is the largest producer of spirits in Slovakia. While the distillery’s origins date back to 1867, it was 1922 when the Liptov Liqueur Factory first produced a Borovička. St. Nicolaus makes many of Slovakia’s best selling domestically produced spirits. Klasik Slovenská Borovička is one of several that the distillery currently produces for the domestic Slovakian market.

[Read more about their “innovative” version of their Borovicka]

Ethanol on the nose with slight hints of pine in the background.

I definitely got a medicinal aroma at first sniff. There’s a slight hint of juniper brandy aroma just underneath, along with hints of retsina, resin, and grape brandy.

Relatively harsh with a lot of pure ethanol notes, hints of pine resin and juniper add a bit of color, especially towards the finish when the heat dies down.

The stereotype of Eastern European local spirits being harsh is a trope widely played out in Hollywood films and contemporary media. A site for ex-pats in Slovakia says that Borovicka “also tastes like a tart (albeit harsh) Distilled Dry Gin” [source]

Most Borovicka— although inexpensive distilled spirits— aren’t harsh. Many are low ABV and quite easy to drink. But Klasik Slovenská Borovička is one of those that unsuspecting tourists may want to be wary of.

Klasik Slovenská Borovička is mostly ethanol on the palate with precious little else to distract from it. Hints of pine and juniper are present. As I said above, if you wait for the initial bitterness of the base spirit to pass, you will get some clear and present juniper.

The finish after that is terse and generally the result of ethanol drying out the palate.

Klasik Slovenská Borovička is a somewhat disappointing and harsh take on the Slovakian spirit. Priced rather inexpensively, it can be a good deal for those looking for a taste of it; however, when better options like BVD Borovicka are out there, it’s hard to recommend this one.

Since 2010, David T. Smith U.K. based gin writer— creator of Summer Fruit Cup and author behind 2018’s Tales of the Cocktail nominated Gin Tonica— has been sharing samples of spirits that I can’t obtain stateside.

Thanks to him for this sample!