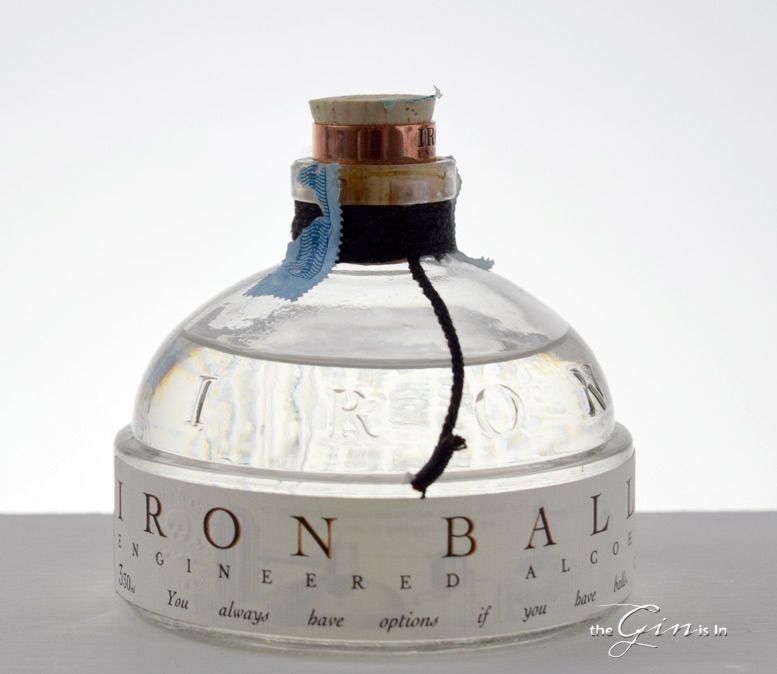 The first thing you notice, well aside from the name.

The first thing you notice is the unusual shape. And the Thai writing on the bottle.

But the real first thing that a gin scholar might notice is that Iron Balls Gin is made from something highly unusual. Not botanically: ginger and lemongrass are common in gins as they are in Thai cooking. It’s the base spirit. Which get this, is distilled from some very “Thai” fruits. Pineapples and Coconuts are fermented, then distilled, and the resulting vodka is then re-distilled with botanicals to make a gin.

However unusual it may seem at first blush, it’s worth pointing out that fermenting and distilling pineapples isn’t completely unique to Iron Balls. Hailimaile distillery in Hawaii distills their spirits from local pineapple. Heck, even moonshiners put pineapple to good use. And then there’s pineapple brandies as well, but I digress. In short, the idea is that in places where grain/rye/wheat isn’t as common as it is say in Europe or the United States where many of our gins hail from, Pineapples have a long history of as a local fermentable, dating back hundreds of years in beers, chica or other non-distilled alcoholic drinks.

The nose is almost literally fruity, with sweet notes of tropical fruit, lemongrass and orange peel with a touch if galangal-esque spice. The spirit smells incredibly clean. For those that are familiar with fruit base gins, the nose is completely without some of the fruity funk that is not-altogether-uncommon among other less traditional base spirits.

The spirit is quite easy going and very mild in character. Lots of fruit again! Mango, tangerine, pineapple, and then spice takes over later with a hint of clove amidst mace and ginger. Green, lemongrass late and quite strong, the finish is nearly as clean an expression of lemongrass as I’ve ever tasted in a spirit; however, the finish is incredibly brief. There’s very little heat coming from the spirit and the flavor fades quite quickly.

It’s certainly sippable on its own, and somehow it almost tastes diluted straight from the bottle even at 40%.

I though the Martini was quite delicious, as the sweetness does well to be restrained with something a bit more bitter. But Iron Balls Gin didn’t quite live up to its boast in cocktails like the Negroni or Martinez wherein the other ingredients, in particular the sweet vermouth seemed to overpower the more subtle fruit-forward notes in the gin. Nice in a Gin and Tonic, I suggest increasing the ratio of gin to tonic. Try it in an Aviation, Leap Year Cocktail or Corpse Reviver No. 2  for a surprising, but somewhat not-so-gin-like take on your favorite cocktails.

I think there’s very little juniper coming through here, so little that I could easily see how fans of nearly any style of gin might easily mistake this for a tropical vodka. That being said, I don’t want to be too hard on it as it is a particularly enjoyable spirit on its own merits. Nice balance between the fruit and spice notes; an impeccably clean spirit that’s smooth and easy to drink. Although fans of classic gin won’t find much like to here, contemporary gin fans in search of something new, or something to get their friends to take a baby step away from flavored vodkas will find Iron Balls Gin to be a worthwhile addition to their home bar cabinet, if at a steep price.

One thought on “Iron Balls Gin”