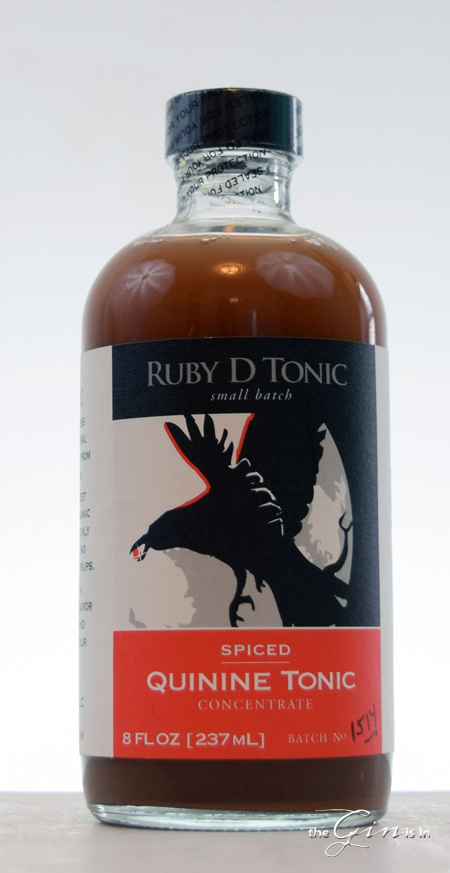 Ruby D Tonics out of Eugene, Oregon capitalized on the “customize your gin and tonic profile,” campaign with a line of tonic syrups that emphasize different profiles. Their Citrus Tonic is bright and plenty sour; their extra bitter tonic flirts with the upper boundaries of how much quinine you can put in a tonic syrup. And their Spiced Quinine Tonic— puts the supporting cast of herbs and spices at the fore in this variation on their tonic syrups.

On its own, it’s quite sweet and cloying. Plenty of citrus notes round out the spice blend. The finish is heavy on the anise, ginger and cinnamon notes with a more sour than bitter finish.

Mixed with sparkling water, the bitter notes of the spiced quinine tonic begin to come out. I think the added bit of salt from a good club soda is a nice counterpoint, which strips down the sweetness somewhat. Clove, orange peel, and quinine early— the finish is only slightly bitter. It’s perhaps the least bitter of the ones I’ve tried on the Ruby D Lineup so far.

I recommend club soda as the “sparkling” component of your gin and spiced quinine tonic. Overall, it adds nice spiced notes but is perhaps a little mild in terms of the bitter. Pair it with a good classic style gin, preferably one that is heavily single note or strongly juniper. Mixing it with spice-forward contemporary style gins will just be a lost opportunity.

Ruby D’s Spiced Quinine Tonic is a solid option for those in search of a spice-forward tonic syrup.

Ruby D Tonics are available via Amazon or from Ruby D Tonic’s website.