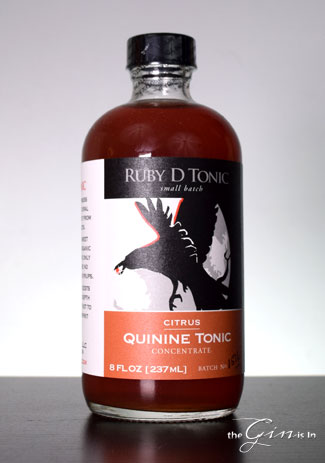 Ruby D’s Citrus Quinine Tonic takes their main tonic syrup offering and subtracts some of the herbs and spices and instead veers in a totally different direction with citrus zest and citrus oils. It’s part of a series of tonic syrups which instead of cultivating a following based around catering to one subset of the tonic syrup market, Ruby D  makes one for everybody. More spice. They got it. More bitter. That too. Citrus. That’s where we are today. So if the idea of a citrus forward tonic syrup doesn’t appeal to you, you can stop here. They make one that might be more to your tastes. But if your G&T demands more citrus, then here you are.

The nose of Ruby D’s Citrus Quinine Tonic has woody notes, orange flesh, grapefruit, and a lower sweet spiced base that slightly resembles cinnamon and allspice. Certainly, heavy on the citrus though, but in a good way.

On its own, it begins with a very sour sensation on the palate, with a lemon juice like pucker. As I wait for the fog to clear, there’s notes of lemon, lime, white grapefruit, and clementine. It’s just the right amount of sweet on the back end, where you get a nice hit of quinine and clean bitterness, along with hints of lemongrass as well. The syrup tastes rather thin on its own however, lacking in a certain kind of richness that many others have. With soda water, the sourness mellows out, and it ends up being a refreshing, gentle orange soda flavor with a bitter after note.

With gin however, it really sings. The citrus is just the right amount to add the citrus note where you need it. The bitterness shines bright with more zest notes coming through. I think it makes a really good citrus-forward gin and tonic, with orange, bitter orange, quinine and only a slightest hint of sweetness coming through. We mixed with their standard ratio, and we love the way it pairs with classic style gins.

Citrus Quinine Tonic is a wonderful counterpoint to a juniper forward gin, that achieves exactly what the label says. If you want a citrus gin and tonic, I think it works really well and does so without overwhelming the gin too much with syrupy/woody notes.