Price: $10 / 8.45oz.
Best consumed: with a loud juniper forward gin, though honestly, I found it to have so much character on its own, that it might actually be a better match with vodka.
Sweetener: Cane Sugar
Availability: Online/locally in Astoria, Queens, New York.
Rating: Hot and spicy, it brings the heat and for those who feel like the tingling sensation of Capsaicin was what their Gin and Tonic was missing, this is a much better and more convenient option than just plopping a Jalapeno in your drink. 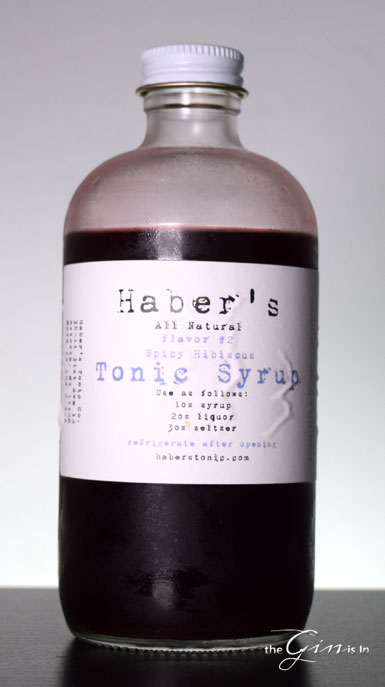 Russet in hue, Haber’s Hibiscus Spicy Hibiscus Tonic is the more floral offering to complement their primary offering Haber’s Tonic. Crafted in my very neighborhood, I’ve seen Haber’s locally at a few bars and small local stores. I included their tonic in my tonic syrup giveaway this past fall, and when I did, they sent me a preview of their forthcoming Hibiscus tonic.

On the nose, the syrup has a lot of ginger, hibiscus flower and vegetal, peppery notes underneath. Sipping it, you realize that the note of hot pepper and the label “spicy” doesn’t refer to an abundance of spice as much as it serves a note: there’s hot pepper in here. Building spice mid-palate, the floral tea notes part wherein a vegetal, part chili pepper, part Poblano pepper notes comes on crisply. Ginger towards the finish with a slight hint of bitterness. Though there’s a lot going on in here, I’d say the primary effect is one of heat and hot pepper.

With seltzer and just the syrup, the hot peppery heat is quelled nicely, and while it still brings the heat, it’s more restrained and complimentary. I get a little bit more of a hint of bitter orange rind, celery seed and black pepper, with Tabasco sauce like undertones.

Mixed with gin, the gin itself shines over the first half of the palate, while the peppery and heat laden notes come on more strongly later. The juniper certainly came through, but I found the Hibiscus and floral notes receding into the background, overshadowed by the hot pepper notes.

Overall, it’s a really intriguing mixing tonic syrup that adds some heat to your next gin and tonic. But I think that in the phrase “spicy hibiscus,” it’s the spicy which takes top billing, while the Hibiscus recedes becoming as blended into the overall flavor as the ginger, citrus and quinine notes. It’s more a spicy tonic than anything else. If measured as that alone, it’s a really nice spicy tonic syrup.

Scroll back to top