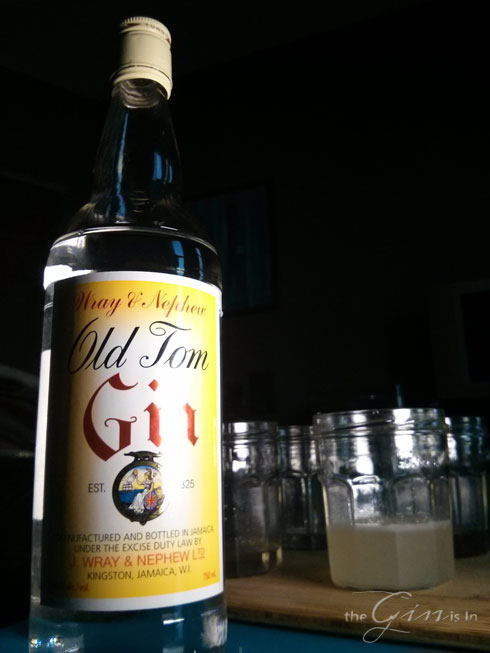 Firstly, a huge thank you to John, a.k.a. Foodie Pilgrim, who was so kind as to help pick up Wray and Nephew Old Tom Gin for me during his recent visit to Jamaica.

This gin’s reputation precedes itself somewhat. Particularly during the long dark era in which Old Tom Gin was completely unavailable. Its name taunted people from afar, with the possibility/potentiality of a long lost style still extant on some far away tropical location. Only available in that tropical location. I mean, isn’t that the dream? To have to to travel to try something?

Well the sad news is that I’m not quite sure it delivers on the promise of the name. It is not the long lost Old Tom bartenders were looking for.

But to summarize for emphasis, Old Tom for Wray and Nephew Old Tom is a brand name, not a style identifier.

On the nose, sweet, a bit of hay, citrus, some juniper, as well as a little bit of ethanol. The nose belies a certain roughness of character.

The palate is quiet at first, though it never really rises to a shout. Creamy grain at first; lemon, dry juniper, in the middle. The finish is a bit hot, with hints of metallic and other off notes. It tastes a touch artificial with each note singing at the same consistent pitch, with the interplay between the notes virtually non existent. I guess to continue the metaphor, it hits the notes, but never really comes together. The harshness on the end does no favors, though there is this light uplift at the end that seems consistent with other botanical spirits which use licorice, or that sweeten it artificially. As I said before, when something is manufactured rather than distilled, it can be challenging to separate the craft from the science.

As it said Old Tom on the bottle, we did decide to mix Wray and Nephew Old Tom Gin in a few cocktails as if it were an Old Tom anyway:

We first tried Wray and Nephew Old Tom Gin in a Gibson Girl, [for more on this drink]. Really herbal, with a little bit of sweetness up front. Grassy with an oxidized finish, dominated by the Vermouth.  Again, branching out we tried a Tuxedo Cocktail. It was dominated by the absinthe on the nose. The palate began surprisingly quiet and a little sweet. We had some notes of juniper and citrus in the middle, with fennel seed and star anise shining on the finish. Nice finish, a good amount of complexity. But could any of it be attributed to the gin?

Coming back the classics, you put the word “Old Tom” on anything, and I’ll likely want to mix a Martinez with it. Quiet, slightly sweet of fruit, cherry in the middle with dry notes on the finish calling to mind laurel and cinnamon bark. Finish is long and relatively clean, but at this point I’m noticing something: I feel like I’m grading the cocktails based on the other ingredients rather than the gin. Its mixing down, adding a couple of the signature notes of gin, but not transforming or uplifting anything. It’s merely a “meh.”

One more drink: The Tom Collins. Lemon up front dominated, but there’s a little bit of quality and complexity in the finish. Juniper spice leads into a little bit of sharp Angostura. Though the gin doesn’t elevate the drink, it is certainly present and able to be tasted. The dash of angostura really steps in where Wray and Nephew Old Tom Gin lets off and adds a spice, earthy lift to the drink.

Sometimes the end result is only as good as what you put in. I can’t say much about the base spirit as any character that it might contribute is called into question with the “gin essence” that is added during the manufacturing process to give Wray and Nephew Old Tom Gin its gin flavor.