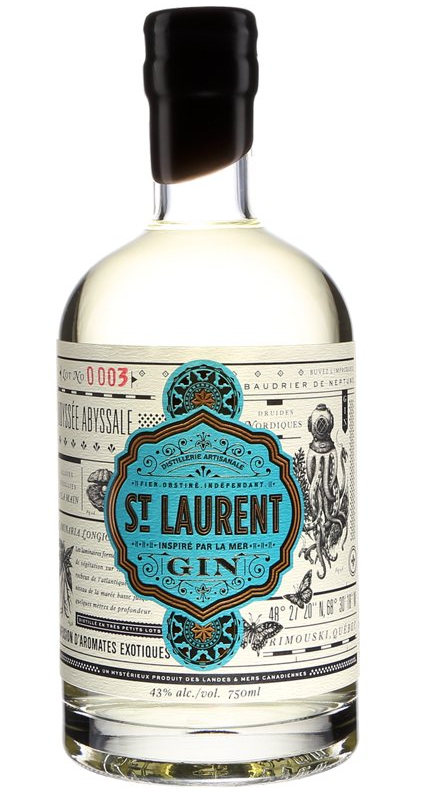 The seaweed in St. Laurent Gin is laminaria longicruris, perhaps better known to sailors of North America as Oarweed. This kind of kelp grows from the Long Island Sound all the way north to Ellesmere Island. It’s brown in color and adds an “iodized” note to St. Laurent Gin.

Distillerie du St. Laurent, located in Rimouski, Quebec, Canada takes their terroir inspiration from the St. Lawrence Seaway. The gin is distilled in a 380 liter still with the botanicals in a gin basket, and the Oarweed is added via maceration after distillation. It’s perhaps not the Quebec we’re used to expect in gin. While others romanticize the arctic north, St. Laurent Gin celebrates Quebec’s maritime heritage and the port cities along the St. Lawrence Seaway which connected the Great Lakes with the Atlantic Ocean.

The nose is a bit green and slightly spicy. There’s a bit of juniper early, but I’m getting notes of cabbage, licorice, allspice and ginger. A really odd combination, but it kind of works. There’s a peculiar hint of Eugenol in there, clove perhaps?

At the front of the palate, there’s spruce and green notes, with a serious hit of cassia and cinnamon.  St. Laurent Gin then becomes a bit more literally herbal, with a vegetable broth and a touch of red hot cinnamon candy mid-palate. I’m also getting some Bay leaf, oregano, and sweet black peppercorn.

The finish is dry and oddly a touch salty tasting. There’s a briny note at the end of the palate that lasts through the finish, providing an interesting perspective on the dry juniper notes. The finish is quite long with bitter orange and cardoon.

St. Laurent Gin is a peculiar cat. There’s some traditional touches and some really unusual touches. As a gin and tonic, I find it a touch less refreshing and a little bit more beachy with notes of seaweed and seashore. As for a Martini, the brininess definitely comes through. Same even in a Negroni. It’s really quite devoted to its concept.

Which is a good and a bad thing. It’s a bit unusual in most standard cocktails. I think you need to go in expecting and wanting that hint of the sea. Picture this. There’s some people who love Oysters for that salt-water “essence of the sea” flavor. Oyster aficionados love that sea-taste. But then again, there’s people who don’t like that flavor. If you’re among the former, you may really like the briny, slightly spicy Martini.

I recommend it as a Martini to accompany a plate of Oysters of Mussels. If you want to talk about the power of pairing gins with dishes (and/or fishes), this might be one of the first ones to take a look at.

Unusual and well-executed, St. Laurent Gin is aimed at a specific audience. I think it’s among the better gins in their incorporation of seaweed, but like other gins of this ilk, St. Laurent Gin rarely works as a standard gin. Treat it like a specialty gin that you go to for that unusual, but well done briny/spicy/juniper flavor. If you’re looking for an everyday gin, classic gin fans and bartenders looking for something easy-to-swap-in-and-out are advised to look elsewhere.

Special thanks to John at Foodie Pilgrim. Since 2012, John has shared and sourced gins from New England and nearby that we at The Gin is In haven’t tried yet. This gin sample was shared by John, who is also a big fan of gin. So check out his New England Gin Reviews as well when you have a chance.