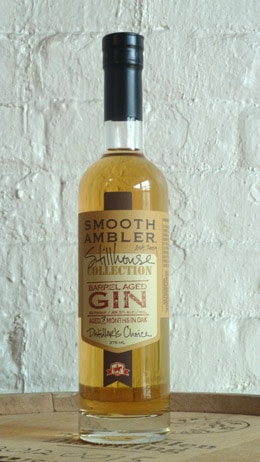 Previously on the Gin is In: We reviewed Smooth Ambler’s Greenbrier Gin. We were impressed with the mash base, its whiskey like notes complimented with a bold gin like profile. We found it delicious and notable. Today, we get the opportunity to try Smooth Ambler’s Stillhouse Collection Barrel Aged Gin, which was aged for three months in oak barrels.

This review is for batch 1.

Immediately on the nose I was struck by the warm notes of burnt sugar and caramel.  In a cup though the gin like qualities open up a bit, revealing spruce and juniper, a mild sweetness and note of orange.

Tasting Stillhouse Collection Barrel Aged Gin, it starts slow, building from a quiet beginning in an increasing build until the juniper and the oak almost hit you all at once on the back of the mouth.

The oak character and after notes are a bit peppery and a bit sweet. Some juniper and a burnt orange rind character that seems to encompass that initial sweetness and the gin’s citrusy character.

I think Stillhouse Barrel Gin has a rather mild character: smooth and sippable— delicious on its own Neat and On the Rocks— bartenders may find that it gives up some of its character when mixed in cocktails.

It did shine in an old-fashioned and in a barrel-aged Negroni as well. Well rounded and smooth, it can be a standout player when made the unabashed star of the show.

But for my money, Stillhouse Collection Barrel Aged Gin is a gin for merely sipping.