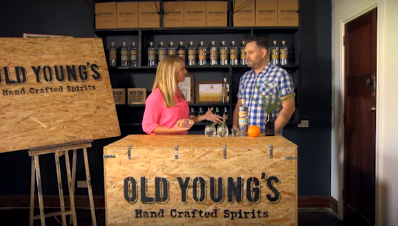 From Western Australia, made in Swan Valley the folks at Old Young’s Distillery seek to put a little bit a little bit of their local and cultural heritage in the work they do. My buddy David Smith again shared with me this sample of their Six Seasons Gin which is based on the Aboriginal people’s calendar. and it includes six native botanicals to embody that spirit. The gist of these non-European based seasonal calendars is that each season carries with it a bit more knowledge about the land and the weather conditions. For example, the people of the Southwest Coast had a season known as Bunuru, which was characterized by hot, dry winds, and as a great time for catching fish and collecting wattle. So not just a time, but more of a state and condition.

The nose of Six Seasons Gin interesting and slightly spicy with hints of coriander and hazelnut notes. A slight eucalyptus/mentholated juniper note lies just beneath that, but seems to be squarely out of the foreground. As the top notes fade, there’s notes of unripe fruit and a slightly greener note that remind me of Kiwano melon.

The palate is definitively spicy with a flavor that I’ve only tastes in other Australian Gins. It’s hard to put my finger on it as I don’t know the botanicals as well, so I’ll revert to metaphor and comparison where needed and attempt to call it out.

Juniper, crisply at first, warming with peppery, cubeb laced mid-palate. Think more the cooling, minty note of pepper after the initial distinctive peppercorn taste fades. The back half of the flavor seems to be resting on Wattle Seed until a minty note, with only a subtle eucalyptus note. The juniper segues wonderfully into the minty note on the finish, but there’s something else here as well. A hint of anise/fennel with a slight note of sweet cucumber, a mild dash of citrus seems here as well, reminding me a bit of Rangpur Lime.

Overall, I think Six Seasons Gin tastes like an Australian Gin, which honestly may be exactly what they’re going for. Could there be an Australian Gin accord [wattle + eucalyptus + juniper] that is set to rival the British one [coriander + angelica + cassia + orris + juniper]? I’m not sure yet, though I know many Australian Gin distillers and gin critics alike are trying to make Aussie Gin its own style.

But as it stands on its own, it’s a well made gin that ignites my appetite to hear more from Old Young’s Distillery. Can’t wait to see what they do next.