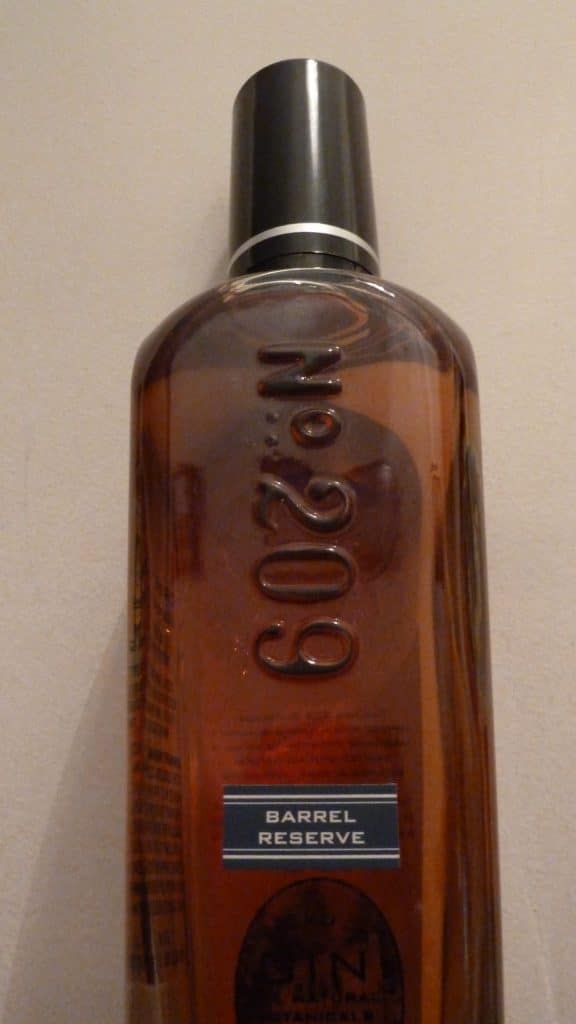 Its color is a rich deep shade of golden brown, close to an almond shell. It is much darker than the Sauvignon Blanc for comparison.

A very interesting and quite unique nose for a gin, lots happening here.

First cardamom, and then Madeira and Sherry. There’s a bit of that similar lemon and citrus rind note from the Blanc version, but the gin notes seem a little more in the background here. Less juniper initially, and unlike other aged gins, a mild nose that doesn’t assault you with oak and overt signs of aging.

The palate of No. 209 Barrel Reserve Cabernet Sauvignon is complex as well: oily citrus and cassia initially. A robust full bodied middle, with juniper, pepper, baking spices and a bit of heat. The finish is somewhat oaky, but largely Sherry, with oxidized fruit, grapes, apple. Very smooth the whole way through. Complex and thoroughly enjoyable neat.

I found No. 209 Barrel Reserve Cabernet Sauvignon to be quite a challenge to mix with. I lost some of the finer points of it in a Negroni, with it seeming not altogether different from any gin mixed with a sweet Vermouth on its own. That being said, its interesting that the gin itself faintly reminds of the notes from this drink, and the Martinez on its own, but doesn’t really warrant recommending it for those drinks. I liked the way it worked in the martini though, almost calling to mind a perfect Manhattan when combined in a 3:1 ratio. The oaky richness and the rich wine like fruit notes really blended nicely. Highly recommended.

Again, it’s hard to not give props to the Michael Carlisi, as he really did this gin justice in his series of competition cocktails. My favorite one of all the drinks he made was the Basquiat’s Crown. Essentially, the martini that I spoke about above, with a dash of plum bitters and salt. Sometimes brand’s cocktails are just mild variations on classics, or just promo material for the sake of being promo material. I think these are really well considered cocktails for a gin that is a tad hard to mix with.

Basquiat’s Crown
1.5 oz. Cabernet Sauvignon Gin
1.5 oz Dry Vermouth
dash of plum bitters
half a pinch of salt
stir with ice, strain and serve up with an olive garnish. [source]

As I said, I found it a bit hard to mix with, but truthfully, when a gin is this interesting neat, sometimes cocktails end up taking a backseat.

No. 209 Barrel Reserve Cabernet Sauvignon is an interesting spin on aged gin. The notes added from the aging in wine barrels enhance and highlight the gin, while giving it a character and mouthfeel you’re not used to from a gin.