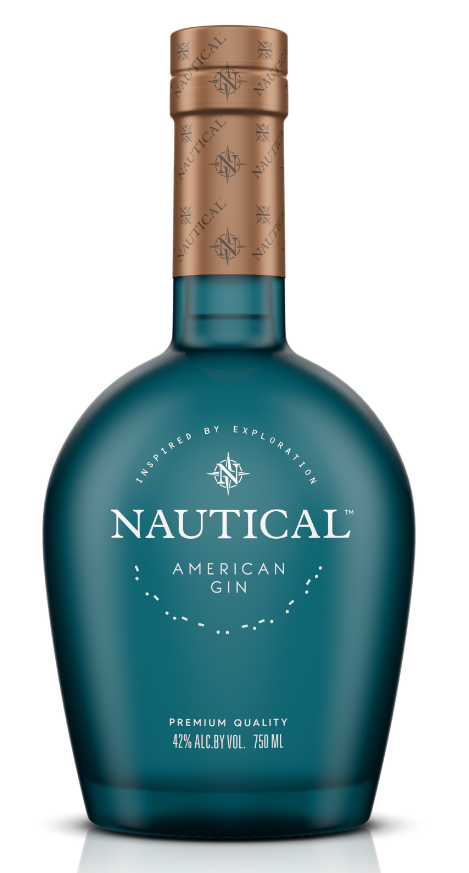 Nautical Gin is “inspired by adventure.” Hailing from New Hampshire, Vertical Spirits’ adventuresome gin sources botanicals from nearly every continent. Indian Coriander, Stateside mint, Egyptian Lemongrass, Chilean Rose hips, Spanish orange peel to name a few. But I think the one botanical that stands out as unusual is the Chinese grown Kombu.

Seaweed has been something of an underground trend in gins as of late. Kombu is a kelp that is part of many coastal Eastern Asian food cultures including China and Japan. If you’ve ever had miso soup, it’s likely you’ve had Kombu and didn’t even realize it. It’s one of the primary components of a dashi soup stock and a natural source of the umami flavor powerhouse sodium glutamate.

Kombu is rarely harvested wild; instead farmers grow the kelp on massive ropes in the sea.  Its included in Nautical Gin to impart a hint of sea salt to complete the effect.

The nose is a bit vegetal. I get notes of cucumber, green juniper, lemon with a hint of parsley and rose. I’d say it reminds me slightly more of a seaweeed laden shore than an open nautical expanse— perhaps more of a pre-nautical moment right here. Still in the harbor, to take the metaphor one step further.

The palate is loud with a great deal of flavors coming on in short order. Green, vegetal notes early, reveal a mid-palate with tart cranberry and rose-hips, with mint and citrus in the late-mid palate.

Grapefruit and mint come on late, where you do get a slight briny note. The finish is more rosehips, menthol, and a background peppery spice.

The finish itself is quite long, with a steady building heat that you first get at the back of the palate, and then at the sides.

I tried Nautical Gin in a Gin and Tonic and I found that it really softened some of the citrus and rose hip notes, instead lemongrass, mint and a hint of that green juniper came through here. This might be the preparation for me that most strongly evoked the flavor of the sea on my palate.

As for the Martini, I would suggest sticking to bright, fresh ingredients to accompany it. I think that a lemon twist serves it well, as well as a really classic Vermouth like Martini and Rossi. But I’d suggest staying away from the Dirty Martini* as the olive brine seems to amplify some of that seaside funk notes. It tasted super salty and super seaweed-y. This just didn’t work for me.

There’s a lot of potential here for bold cocktail ingredients as well. Try it in a Negroni. You won’t get any salt, but you will get this hint of Kombu and Rosehips along with some green juniper that is intriguing and unusual.

Nautical Gin’s seaside affect may prove to be divisive. There is some literal design here which I think is successful. But does it work as a gin.

The answer is sort of. While I found it to make a pretty good Gin and Tonic, I found some of the brine and seaweed notes to be unusual enough to throw off the palate of some traditional cocktails. I’d advise caution to bartenders seeking just a plug and replace with Nautical Gin.

On its own, I think the palate may be trying to do too much. There’s so many loud, unusual ingredients in here that it never quite comes together for me. In my opinion, it needs some focus, and the botanicals or the botanicals’ expressions need to be honed or focused.

Classic gin fans probably won’t find enough juniper here to warrant a closer look. But contemporary fans interested in capturing the scent of a the shore on a summer morning may want to check out Nautical Gin.

*Some of my readers who are more part of serious cocktail culture might be surprised to see this drink being included in my reviews; however, upon doing some research I was surprised to find out that the dirty gin martini had a particularly devoted following. The “Dirty Hendrick’s Martini” is undoubtedly a thing. So although I don’t drink them myself, I think it’s worth trying to include them in my cocktail write-ups more often in the future.

Special thanks to John at Foodie Pilgrim. Since 2012, John has shared and sourced gins from New England and nearby that we at The Gin is In haven’t tried yet. This gin sample was shared by John, who is also a big fan of gin. So check out his New England Gin Reviews as well when you have a chance.