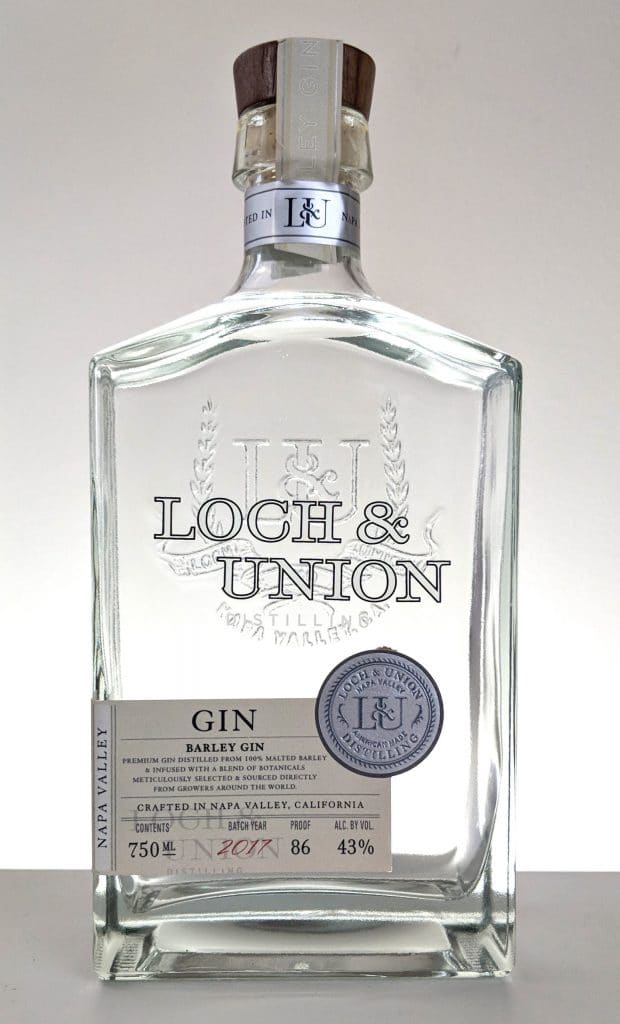 There was a time in cocktail history— especially American cocktail history— where there existed a variety of different types of gin, including some which were specified more generically. For example, “Rye Gin,” or “Barley Gin.” In the case of Loch & Union Distilling’s grain-front-and-center-offering, they take a page from the book of these extinct grain forward designations. Or perhaps even moreso, a page from the book of Holland and Genever with the emphasis on barley.

Distilled similar to their American style gin on their impressive Napa Valley still, it begins with from a base of malted barley. Barley Gin continues from there with the same botanical blend as their other gin; however, at a lower proof as well.

Aroma: Slightly vanilla tinged with heady notes of grilled mushroom, wet leaves and a hint of anise and baking spice.

Loch & Union’s Barley Gin wears the barley on its sleeve. The nose is full of classic hallmarks of malted barley. It’s slightly funky, slightly warming and especially in the case of Barley Gin— it’s really nice. And balanced as well. Aromatics from the botanicals come through and add intrigue and depth. Notes of orange, cocoa, anise, and resiny juniper lie just under the surface.

Barley Gin is aromatically complex, but it’s primarily about the grain.

Palate: Grain and Madagascar vanilla bean husk early, juniper and cocoa beans mid-palate with orange and raspberry on the finish.

Barley Gin takes a second to hit the palate. There’s a slight hint of grain and vanilla early. The creaminess segues into a mid-palate where the botanicals really roar. Juniper is a secondary player here, but present.

I think where Loch & Union’s Barley Gin really surprised me was towards the finish. Floral and fruity notes emerge. Although slight, just like their American Gin there’s a raspberry or raspberry leaf tea hint. The overall finish is quite long and has a moderate to high astringency. Bitterness akin to quinine, it holds your attention for well over a minute if you let it ride.

Another nice thing about Barley Gin is the mouthfeel of the spirit. It has a nice viscosity and texture to it.

Similar to Holland-type gins, Barley Gin isn’t a plug-and-replace option in all traditional gin cocktails. Bartenders should treat Barley Gin as a specialty spirit. While it’s probably not your mainstream Gin and Tonic, Barley Gin was excellent in a Negroni and Martinez.

The warm spice notes of Barley Gin also welcome the tart gentle acrid notes of a pickled onion. Highly recommended in a Gibson.

Perhaps the smartest thing Loch & Union Distilling did was to put the word “Barley” on the label. We’re in a gin market where many distillers include the taste and aroma of their base spirit as if a botanical. It can be done to great effect; however, it can sometimes be difficult to communicate to gin drinks about what they’re getting. Or at the least, what the flavor of a gin may be.

Barley Gin is true to its name and well-made. While ultimately it may be a niche product, gin drinkers who appreciate base character and complex spirits will find a lot to like about Loch & Union’s latest offering.

Recommended in its category