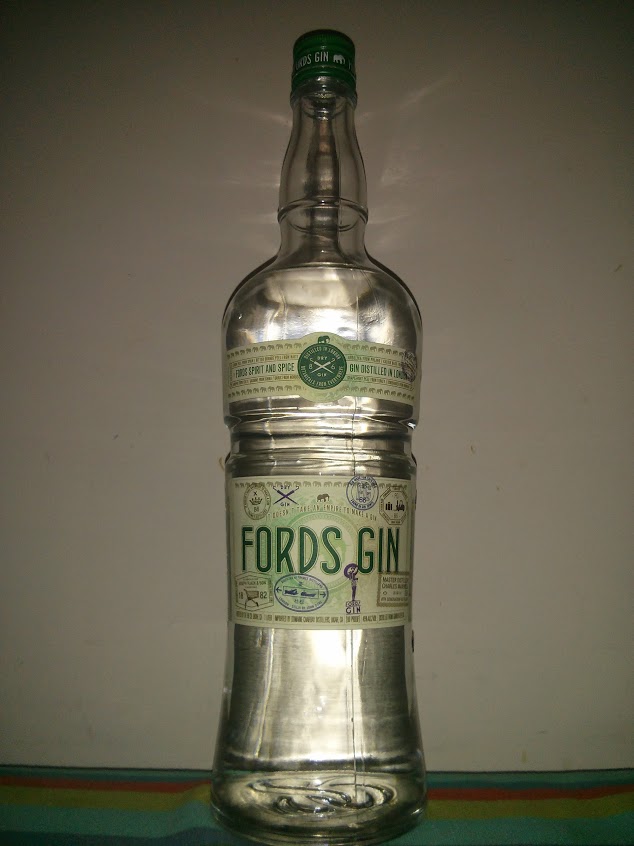 Simon Ford made Ford’s Gin for mixing. For bartenders. For mixologists. For the way that most people drink their gin.

Simon Ford comes with some rather lofty credentials. Some of the gins he’s recently worked with and on include: Plymouth, Dorothy Parker and Perry’s Tot. In fact, in this gin blogger’s opinion not anywhere near a bad gin between them. Out of this experience, Ford’s Gin arose. London Distilled at Thames Distillers, the bottle and feel is steeped heavily in British Colonial icongraphy. References to India, travel, and empire are all prominently placed— and why not? After all, London Gin was distinctly colored by colonialism. The juxtaposition of Eastern hemisphere botanicals, Western Europe botanicals, and the lore of being consumed by shipmen of the British Navy, to do anything less would be a disservice to the history behind it? No?

But oddly Ford’s gin stands against a trend we’re seeing in gin distilling. While many distilleries are going local, or seeking to create a notion of place, Ford’s Gin uses history and lore to create a sense of place [and tradition]. Instead, “Distilled in London; Botanicals from Everywhere” graces the bottle. The botanicals come from Spain, Haiti, Morocco, China, Italy, and so on.

Juniper and bright spice on the nose, some floral hints as well. Mild, fresh, hints of lavender and cream on the close. Nice, smells a touch contemporary in style, but the presence of juniper is immediately detectable. The flavor is actually rich and thick, it spreads thickly and evenly throughout the palate. Florals on the front. Viscous citrus, bright juniper build in the mid palate, This part of the taste is very gin like, reminds me of the mid-palate notes of Plymouth, thought the finish differs radically: complex earthy notes, intimations of angelica and orris root, a building floral punch redolent of rose and lavender, with a lingering citrus finish, fresh zesty peel. Quite nice, with a lot of layers. Rewarding in terms of complexity, and in depth. Quite nice.

Quite pleased with how it works in mixed drinks and cocktails. The martini immediately occurred to me as a great idea, and I was not disappointed: mixed it up with some Vya Extra Dry Vermouth. Floral notes on the mid-palate and finish were prominent, with only a touch of juniper. Well balanced and nicely executed cocktail. Would highly recommend it.

Flavorful in the Negroni as well: candied orange and grapefruit rinds, a hint of creamy richness and a pop of juniper. It’s actually quite a nice Negroni. Robust, rich, and well balanced. A bit of heat on the finish, but it finished quite clean with a restrained bitter finale.

In the Gimlet, I was less impressed. The flavors seemed a little muddy. The citrus lost in the edge of the lime cordial, not much juniper popping. I find this to be a more difficult mixed drink, but not one which I think played to Ford’s Gin’s strengths. It was really somewhat overpowered here with few notes of interest to pass on.

Actually quite a nice drink which I think, true to its distiller’s intentions, is quite excellent in cocktails and mixed drinks. I’ll add to that, it’s also quite stellar neat if you’re into that. I was quite impressed by Ford’s Gin. If it was aiming to be a nice addition to the bar and a good cocktail mixing ingredient, mission accomplished. Although it doesn’t do anything which hasn’t done anything before, and doesn’t do much to stand out from other similar slightly-contemporary styled mixing gins, it’s a worthwhile addition to your home bar or just plain bar.