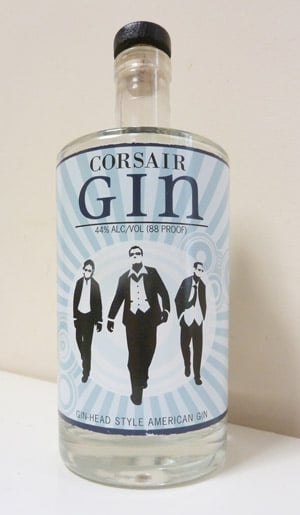 Corsair Gin hails from a part of the United States that you might mistake for “bourbon country.” Corsair Artisan has two distillery locations: Tennessee and Kentucky. It may be that this unexpected location contributes some to the creativity in Corsair Gin. It boasts a rather unexpected array of flavors for a gin and shines in some rather unique ways.

The nose of Corsair Gin is complex and interesting. The most prominent flavor I get is a deep, broth-like smell that makes me think of the way the kitchen smells when you begin heating up a vegetable stock to make some soup. Hints of citrus and a bit of sweetness strike you early, but not a whole lot of juniper. Interestingly enough, on the nose alone I’m not sure I would pick this out as gin. But that’s not to say it calls to mind comparisons to any other spirit out there, there’s not a vodka or a rum or even bourbon that boasts a similar nose*.

The taste is where the juniper emerges from the background. There’s still a hint of that warm broth aroma, but it reveals itself here as a combination of more familiar gin flavors. Rosemary, thyme, even a bit of oregano and bay leaf. Unsurprisingly savory elements which one might see in a soup or a broth. The vegetable character is offset by a bit of sweetness too. There’s warm citrus in there, sweet lemon and orange rind, even calling to mind the taste of a carrot cake or other savory/citrusy sort of dish. This is a gin which reminds me of cooking in the kitchen. The finish is clear and junipery with a bit  of pepper lingering on the back of the palette. Its complex and there’s a lot going on here, and a lot of things going on which aren’t going on in many other gins.

I found the flavors to clash a little bit in a Tom Collins. While there’s a lot of ways to make that drink work, I found the flavor to be a bit dissonant. The lemon just doesn’t compliment the herbal notes, though there’s plenty of citrus here, that’s not necessarily what comes out. The same thing goes for the Gimlet and Gin Fizz.

I thought Corsair Gin was okay in an Aviation, but again I was looking for a bit more of the classic juniper and citrus flavor to come out than did. I still got  notes of the warm herbal bouquet, which as I said before, are interesting and complex, they just don’t particularly work.

Flip that coin over though. If you make a Martini though, I think this is a gin which works rather nicely. A subtle herbal vermouth compliments the herbs and brings out their sweeter, warmer side, while downplaying the elements which I said earlier reminded me “soup in the kitchen.”

Sometimes a gin that works really well neat or on the rocks excels in cocktails where it is the unquestioned star. I think my characterization of Corsair Gin is that while it is creative, unique and fun to taste, it doesn’t play well with others. Gin drinkers in search of something a bit more herbal though are really going to enjoy the Corsair Gin martini.