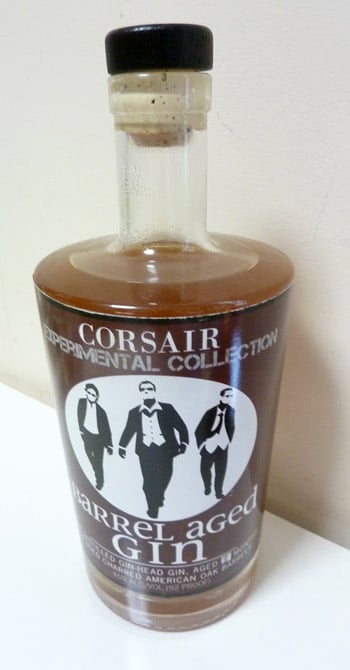 Corsair Artisan Distillers were one of the most adventurous distillers of the early gin renaissance. They released Genever-style gins and Barrel rested gins like Corsair Barrel Aged Gin when few other distillers were pushing the boundaries of the category that far— In many ways Corsair was an omen of where American gin was going to over the next decade.

The nose is a little heavy on ethanol. You can definitely tell there’s some alcohol in here. But if you back away, and waft it a bit, you can pick out some citrus and a sweet sugary note of vanilla. Not a whole lot of oak or aged notes on the nose, it surely doesn’t overwhelmingly strike you as aged, or even gin at that rate. It smells inviting though.

The taste is where the juniper hits you in Corsair Barrel Aged Gin. Juniper up front and in the finish. A little bit of an acidic tenor, lemon and orange with a spicy tang. The vanilla was strong on the nose, but is rather backed off on in the taste. The taste is gin like for sure, a little more amped up on the juniper than their mainline gin offering.

That being said, the underlying gin spirit feels less overwhelmingly herbal than the batch I previously reviewed, and this one seems to have a whole lot more juniper going on. There’s an underlying nutty flavor, almost spiced and candied walnuts in the base. I don’t think there’s walnuts in here as a botanical, but that flavor seems to be coming out of the aging.

Rather unique among aged gins is the choice of barrel. Corsair Artisan Spirits makes a spiced rum, and for this batch they’ve used those barrels for aging their gin. I haven’t had their rum so its hard to say for certain I’m picking out notes that remind of spiced rum, but perhaps in the spices, perhaps in the aging, but there’s an interesting warmth in this gin.

Overall, I rather enjoyed Corsair Barrel Aged Gin. It has enough of the gin character to appeal to gin drinkers, and enough unique notes from aging to make it a unique take on the gin. If I can express one reservation,  I expected a little more vanilla to come off in the taste the way it came off on the nose; however, that shouldn’t take away from it. Corsair’s Barrel Aged Gin is good, unique, and offers a bit of a different character than many of the other aged gins out on the market.