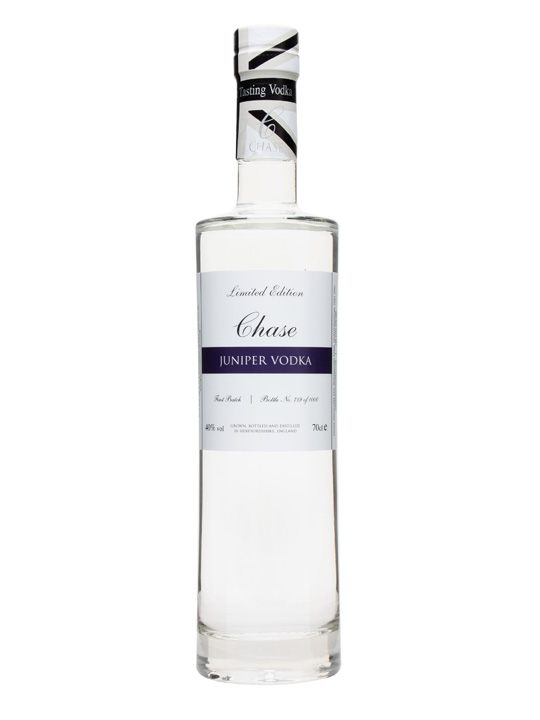 Q. When is a gin also a vodka?

Q. When is a vodka also a gin?

Chase Distillery probes at the “uncanny valley” of the cocktail world, that place where gin and vodka intersect, where their similarities put on display for all to see.

A. Gin, by law, is required merely to have juniper added to it. Yep, that’s all. While terminologies such as “London Dry,” “London Cut,” “Distilled” and others seek to more specifically indicate what a gin is and should be, the law is pretty clear on it. You can add juniper to vodka and you technically have a gin. And what happens when you add natural herbal flavorings to a vodka? You get a whole host of spirits that rang from Aquavit, to other so called botanical vodkas, to gin.

My advice is not to look too hard. You know the only botanical: it’s juniper. As we saw previously with the Origin series of gins from Master of Malt, the expression of juniper on its own can differ, and in some ways quite radically.

The nose is piney and bright, but with a certain delicateness that calls to mind other herbal aromas, with a touch of lemony sweetness. This is all a product of the base spirit and the juniper.

The palate of Chase Single Botanical Gin is woody and pine like— almost forest like. Thick and bright, but one note, before the finish comes in with some surprising depth: resin gives way to fruit, black pepper and orange. I’m really just using colorful language to describe the finish, because as I said: it’s only juniper. A touch of heat, dry lingering and somewhat warm in the back of the mouth. Actually quite nice though.

I played around with Chase Single Botanical Gin and found it to be a good, if somewhat ordinary gin.

In mixing, it reveals itself pretty much as it is. Some of the added complexity perceived when sipped neat, is lost in all but martini and martini like drinks. The Alaska Cocktail was good, if a bit overpowering for the gin. A touch of junipery warmth came through, but the resiny notes were dominated by the herbal overtones in the Yellow Chartreuse. I found it absolutely overpowered in the Bronx Cocktail, but a nice thought. Maybe if you go a little heavier on the gin, we might get a little more juniper and gin like character.

In a classic martini though Chase Single Botanical Gin came through nicely. Juniper and spice, with a hint of citrus at the end, complimented nicely the Vermouth. I also thought it made a really solid gin and tonic, with a hefty dose of bright foresty juniper. The gimlet was also quite a stand out, with the lime really complimenting and rounding out a gin which doesn’t prominently feature a citrus quality. I can say the same for the flavor profile of the aviation, in rounding out the gin with several flavors prominent in other gins, but again, it was merely okay: not special.

A good gin that features just juniper. It’s not all that special. If you really want to experience the range that just juniper alone can impart, check out the Origin series of gins. As an academic exercise, it doesn’t do much for me. As a mixing ingredient, the Origin series was much more interesting. And if you want a juniper forward gin, I think several other folks are doing it better. That being said, Chase Single Botanical Gin is by no means bad, even if it does little to distinguish itself.