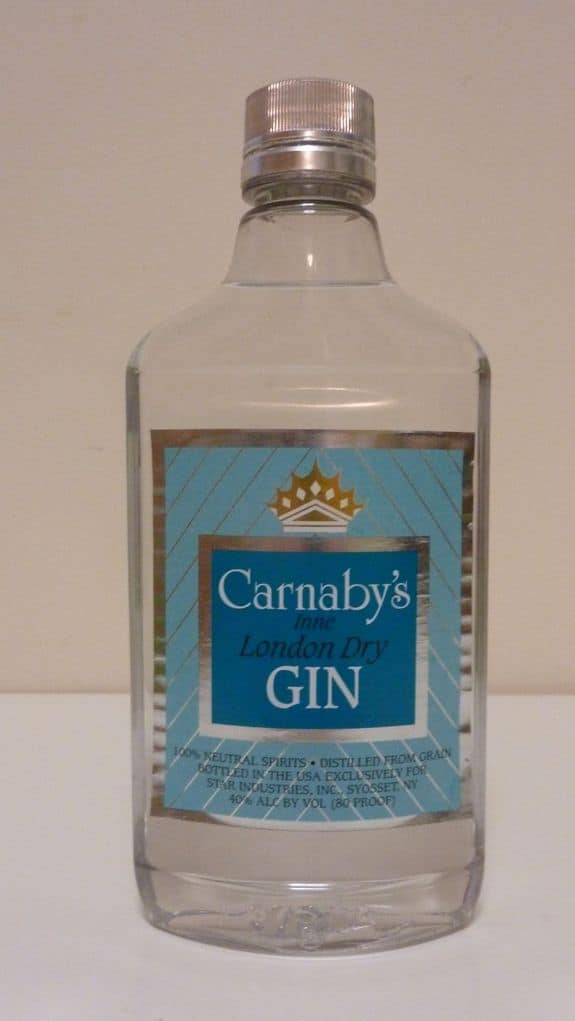 Carnaby’s Gin may have first appeared on the bottom shelf in my local liquor store. But I know—there’s a whole lot more than just quality that goes into shelf position.

Sometimes the big brand names get the prime real estate. Sometimes its simply about price. Other times it alphabetical, promotional, capricious, etc. There’s no reason, so I want to come and approach Carnaby’s Gin with an open mind.

There is no brand-specific website, no other reviews and no list of botanicals on the bottle. What searching I did do, I was only able to turn up a few small mentions of this gin:

Young’s Wine and Spirits describes Canarby as such: “A very good inexpensive domestic gin. A worthy choice when on a tight budget.”

The scent of Carnaby’s gin remarkably unoffensive and neutral. There’s a faint hint of juniper, but not much else. There’s not even a strong scent indicating that this is alcohol from the outset.

After the initial smelling, I was prepared to be pleasantly surprised. So I poured myself a glass and began to taste it.

It tastes rather weak bodied. Almost Watery in quality. It tastes of juniper has a faint spicy heat, probably not spicy enough to be the classic “burning pine” sensation. It quickly dissipates though quickly taking on a flat almost metallic quality, which lingers in the back of the throat long after the initial sip. The finish was a bit off and unusually harsh for the proof.

Carnaby’s Gin was passable in a gin and juice— in the sense that it was there and it would inebriate you after too much. But it took something like a strong juice flavor to cover up the off-notes.

If you don’t want to spend a lot, there’s better options out there in its price range.