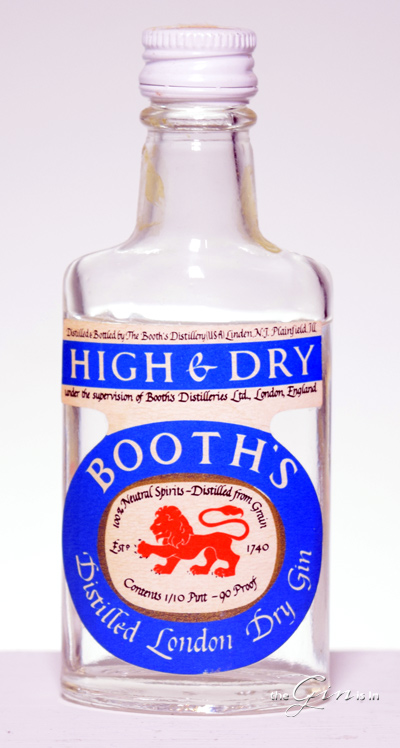 Booth’s is one of the oldest names in gin, with the family’s distilling history dating back to the 1740’s. Booth’s High and Dry Gin is another gin once made by Booth’s Distillers that is sadly out of production.

But Booth’s High and Dry Gin is a fascinating addition to the Booth’s product line. In the post WWII era, the dry gin trend had culminated in a fascination with purity. So Booth’s Finest (with its barrel resting step*) was a little off trend. In the 1960’s, Booth’s High and Dry was marketed as  “Crystal clear” and “the driest gin of all**,” and was presented as a choice (that in their biased opinion, there was no wrong choice).

This vintage bottle we’re sampling was made in the United States (by the 1960’s Booth’s was making their gins in several countries around the world) and therefore was also bottled at a more assertive 45% ABV than the UK version which was 40% ABV***.

As with the other Booth’s products, Booth’s High and Dry Gin is distilled entirely from grain.

As we mentioned above, based on advertisements, we’re fairly certain this gin was produced in the 1960’s****. About 1/8 of the volume in the bottle has evaporated since production.

The nose is straightforward, with piney juniper and not much else.

The palate is intense at first with a good deal of juniper. Pine-forward, it’s truly a very classic styled gin. But behind the juniper, there’s a curious glimmer of something slightly floral. A touch of orange rind, and a viscous, slight tinge of angelica and peppercorn.

That’s when the heat comes on. It’s very harsh with a lot of alcoholic burn. The flavors of the botanicals dissipate quickly and a roaring surge of heat takes over the palate. It’s really, really, really surprisingly hot. Even for 90 Proof, you don’t usually get this long lasting, mineral heat.

It’s kind of clear to see what they meant by “the driest ever.” The perception of dryness is buoyed by an intense heat. There’s certainly not a lot of complexity on the palate. Juniper dominates, with even the usual support notes mostly lacking.

I think that modern gin drinkers might be somewhat unimpressed. The heat and juniper flavor is sure to stand up to other ingredients, but so is that burn.

It’s not a very complex gin. Collectors looking to try a curio from the 1960’s should definitely seek it out and I’m sure they won’t be deterred from trying by a so-so review. To everyone else, I daresay that there’s many better gins available today so don’t break the bank hunting for a sip. But if you do find it in your parents’ liquor cabinet, by all means, go for it.