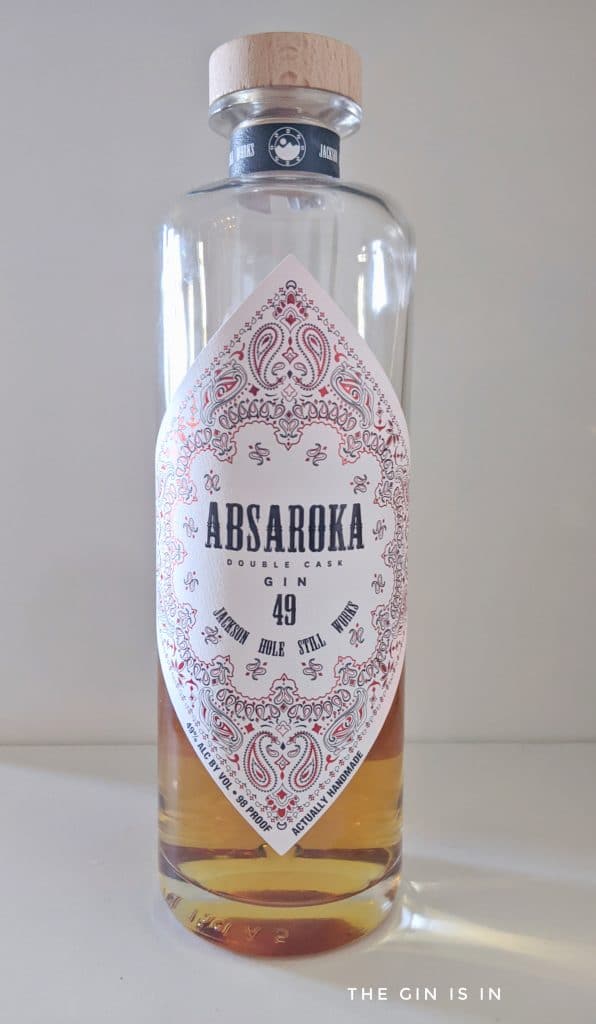 Absaroka Double Cask Gin 49 from the Jackson Hole Still Works in Jackson Hole, Wyoming is aged twice. You may have guessed based on the name, but the same liquid undergoes two completely separate aging periods.

First, Absaroka Gin enters used whiskey casks at 114 proof for a total of 13 months. Then it spends another 4 months in new char American oak. It is then bottled at 49% ABV. The name Absaroka Double Cask Gin 49 tells you everything you need to know.

Botanically it sticks to a traditional set of botanicals with the small addition of yarrow.  The base spirit is 100% Wyoming grown grain.

Absaroka Double Cask Gin 49 hits the nose with slight hints of bright citrus notes. I’m surprised, after seventeen months across two barrels, the orange and lemon top notes are still there, albeit quiet. A hint of toffee and wood lend depth.

Sipped, Absaroka is a botanical bomb. Cinnamon dominates throughout the palate from start-to-finish.

Absaroka has a mild astringency on the palate. There is some of that younger wood, likely from the second aging, adding some green and woody notes. You can almost taste the biting into a coil of Ceylon cinnamon bark.

While it has some potential for people looking to upgrade their choice in cinnamon-flavored whiskey, gin fans will find Absaroka a bit light in juniper and (depending on their preference for it) heavy with cinnamon.

The flavor is fun and unique. The dual aging process adds some complexity and character. I definitely recommend trying it before you buy, because it is a bit unexpected and best treated as if its own thing.