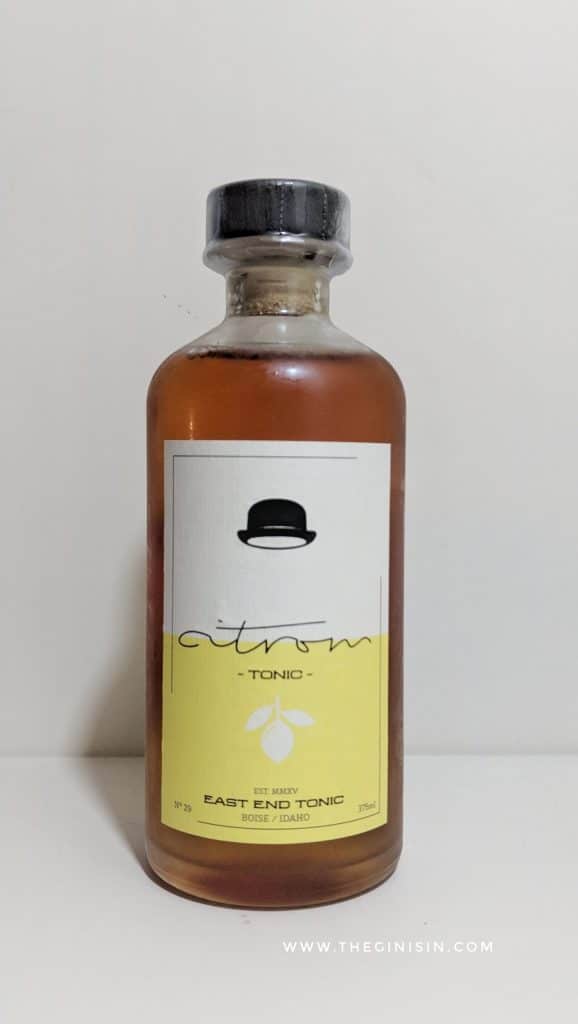 With a bold vision: “We made this Tonic to be the ‘all-around’ Tonic to go with any type of spirit or cocktail recipe that calls for simple syrup and citrus.” Boise, Idaho’s East End Tonic’s Citrom Tonic (the ‘m’ is not a typo) is the more citrus-forward among their line of tonic syrups. Similar to their maqui berry tonic, Citrom tonic is sweetened with sugar.

Unlike the other two, it doesn’t use more than one bark. Citrom Tonic is only cinchona bark. In addition to that, it features kola nuts and lemon oil in addition to spices.

Citrom tonic has an intense, vivid amber color from the bottle. Nosed, there’s a bit more wood than in the other East End Tonic syrups. It’s almost got a spicy A1 BBQ sauce nose. It’s a touch smoky, woody, and sweet with heavy molasses notes. It’s a bit unusual— I wouldn’t have guessed lemon or any sort of citrus for that matter.

The palate is moderately sweet early with a mid-palate lemon and orange zest hit. It becomes slightly more woody towards the finish which at first is slightly cloying with hints of lemon gumdrop and a touch of quinine. Then it becomes a bit more cola-like with citrus, nutmeg, and cinnamon create a note suggestive more of a Q cola than of a Pepsi or Coke.  Overall, on its own, although quite sweet, it has a nice flavor profile.

Mixed with soda, I find that it becomes a bit more staid in its citrus. Wet, round lemon skin mixed with shaved, slightly smoky cinchona bark to create a fairly sweet and mildly bitter tonic soda. Even though I say “mildly bitter,” it’s still much more bitterness than I got off their Maqui tonic. The simplicity of the flavors gives the bitterness more room to come through.

I don’t often try a Gin and Tonic with an aged gin; however, Citadelle Reserve is a bit mild with the wood character and I thought the cola notes of Citrom Tonic lent itself nicely to pairing with an aged gin.

Citadelle Reserve takes over the nose a bit; however, the finish is beautiful with this thick, dense melange of cola and spice. It has hints of ginger, nutmeg, cinnamon, cola nut, and citrus oil. It’s faintly reminiscent of a very light whiskey mixed with cola.

Citrom Tonic also works well with classic and contemporary gins. I would recommend it as a counterpoint to spice-forward contemporary style gins (with the exception of those with a strong licorice or anise flavor).

Among East End’s Line of tonic syrups, Citrom Tonic may be the most traditional in approach. It’s also the one with the widest utility. Excellent with juniper-forward gins, spice-forward contemporary gins and even some aged gins— It’s a versatile tonic syrup that is a welcome addition to anyone’s home bar.