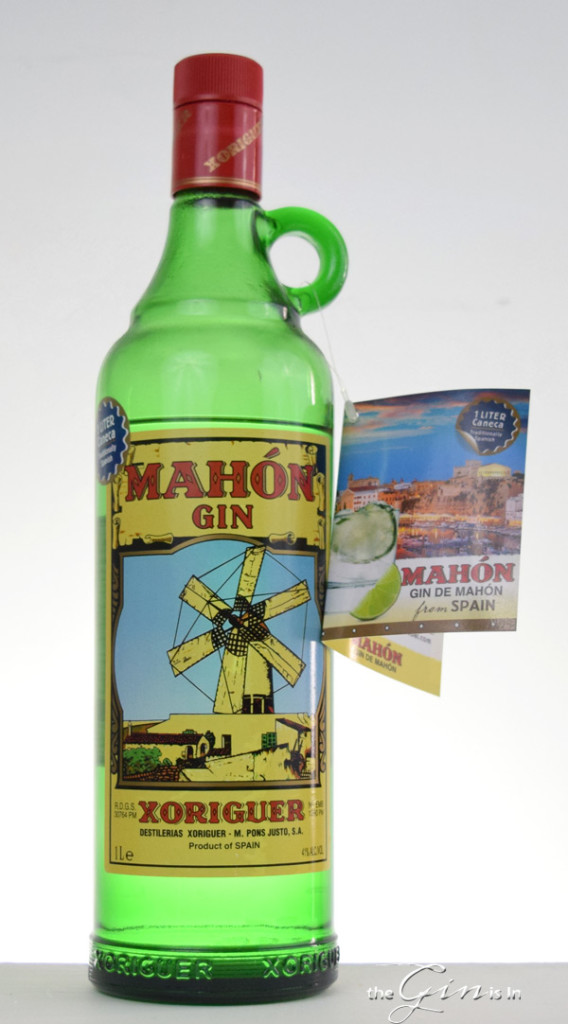 As of 2016, Xoriguer Mahón Gin still qualifies for protection as a gin with a geographical indication under European Union Regulation No 110/2008. Famously, you might remember Plymouth Gin formerly qualified for this as well; however, under the terms of the 2008 regulation, trademark owners had to produce and publicly distribute a technical file which would disclose “what makes this spirit unique.” Plymouth, and Plymouth trademark owners Pernod Ricard, saw the value in the process rather than the GI, and decided to rather than disclose the details of what makes Plymouth so unique, they opted to forgo the Geographical Indication. On the other hand, the GI was so important to La Isla De Menroce, that they did indeed file a technical summary which describes the process in keen detail. Under the terms of the 2008 law, the E.U. approved the technical file and Gin de Mahón is still protected.

So what is Gin de Mahón?

There are three prescribed ingredients: ethyl alcohol of agricultural origin, juniperis communis berries with essential oil by weight content ranging between 7 and 9%, and distilled drinking water. No additional aromas or extracts may be added.

The process might be where the unique process angle arises. Gin de Mahón is distilled in copper pot stills set over a wood fire with the juniper berries in the pot still. The final product of the distillations are then filtered.

The story behind the GI is that the Island of Menorca, was a port of call for British soldiers, who would often stay and frequent the local drinking establishments. Rather than import the booze that might appeal to their guests, the people of the island made their own, creating an economic benefit for the locals owing to their out of town guests. The gin apparently was a hit and worked its way into even local cultural events.

Perhaps what I found so striking about the technical file is that it did not mention that the base spirit must be distilled from grapes. As for the genesis story, the style arose from the grapes which were grown locally. In fact, Xoriguer Mahón Gin is distilled from grapes; however, this curiosity, which would have clearly set apart this gin as being quite unique over the past few centuries in which it has been made (and the grape base is often cited as part of what defines the style), is not actually part of the GI. Just plain old agricultural alcohol, which suggests that grape, potato, sugar beet, wheat, etc. You name it. That’s not what’s special as much as the the direct wood fired heat on the copper still.

A note in GI vs. Style

Although clearly a historically and geographically protected designation, I don’t think that is rises up to to the level of being called it’s own style. While Gin de Mahón may fairly refer to an important cultural and quality protection designation, objectively, I find it hard to say “this tastes like its own thing.” [I also levy this same critique of people who suggested that Plymouth was a style rather than a quality/cultural designation]

While the name Gin de Mahón should connotate warm images of wood fired copper stills on a beautiful Balearic island, it doesn’t necessarily connote a spirit which tastes a certain way. The dearth of ingredient, base spirit, and wholly unique process elements means that geography aside, there are other distilleries doing something quite similar around the world. So we won’t treat it as if its a style unto itself. We’ll evaluate the gin as a gin, that just happens to have a long and illustrious history.

Lots of juniper on the nose, with some camphorous and herbaceous notes suggesting pine resin and rich, oily juniper berries as well. The nose is largely one note by my assessment, though it does an excellent job at capturing a really rich portrait of that one note. Heady and juniper-forward.

The palate of Xoriguer Mahón Gin is thick and luscious, with copious amounts of pine and juniper again. Spruce, an some faint intimations of lemon zest behind the scenes, with sage, juniper needle and pine. The finish is long with juniper. It’s dry with conifer in the rain sort of notes, with a pleasant ensuring warmth.

One of the intriguing ways to drink this Mahón Gin, which as I’ve read may be a the closest to how it is best enjoyed in Menorca, which is mixed in a 2:1 ratio with Lemonade. The spirit is nicely moderated and brightened with the sweetness and citrus. I definitely recommend this drink, which I think even suggests that you could pack this gin in a cooler for the beach. It’s also good, but heavy on the pine resin in a Gin and Tonic. I think it had some interesting character that it brought in some mixed drinks like the Aviation and Last Word, but I enjoyed it perhaps most of all in the Gin and Juice style.

Overall, Mahón Gin is a lovely juniper forward gin that will delight those who have been looking for some more juniper in their life. Fans of more contemporary style gins, may want to look elsewhere.