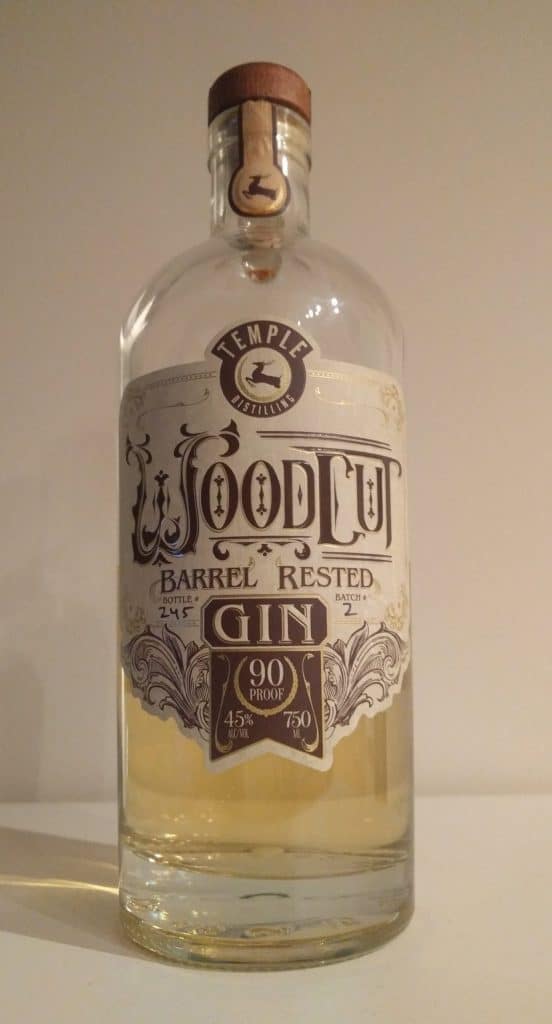 Woodcut Barrel Rested Gin is Temple Distilling’s Chapter One Navy Strength Gin rested in used whiskey barrels. The gin is rested for six months before being diluted to 45% and bottled.

Woodcut Barrel Rested Gin is pale straw in color. The nose has notes of citrus, subtle vanilla, cedar plank and cassia sticks with an earthy slight grassy note underneath. It’s a fairly traditional aged gin style nose with both barrel and botanicals shining through.

Similar to their Navy Strength offering, citrus is prominent on the palate. Wood and subtle buttery notes come on early. Botanically the mid-palate is strong with a hint of spicy red cinnamon and oak.  Towards the end notes of cooked lemon and herbes de provence— as well as some more cassia. The finish is quite long. Woodcut Barrel Rested Gin is mildly warm with notes of lime zest and a hint more cinnamon. There’s something about the aging process and the barrel with Woodcut Barrel Rested Gin that truly brings out some of their Navy Strength Gin’s spicy notes.

Woodcut Barrel Rested Gin makes for a zesty, spicy and citrus-forward all-at-the-same-time Negroni. It’s vaguely holiday-like to me reminding me of warm fires and Christmas cookies. This is a nice wintery gin.

Otherwise, I really like it in an Old Fashioned, especially dashed with cherry bitters— or walnut bitters— or better yet both. I find that bit of sweetness mellows out some Woodcut Barrel Rested Gin’s spicier notes and brings out that right citrusy base.

Spicy and warming, Woodcut Barrel Rested Gin is a solid aged gin that is another solid addition to the Temple Distilling Co. spirits family. While the spice can be a touch domineering at times, especially neat, the gin nicely integrates the barrel notes with their contemporary style Navy Strength Gin.