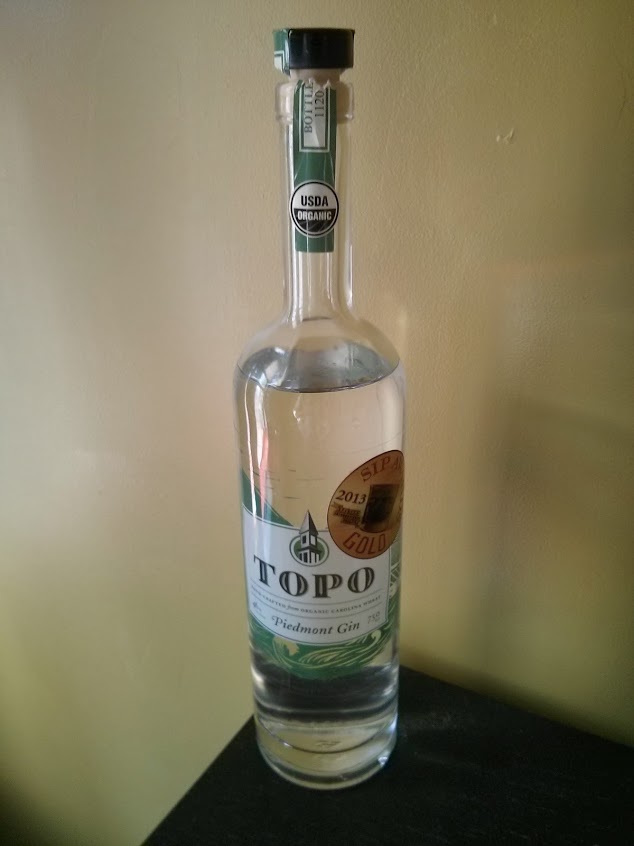 From the “Top O(f) the Hill,” —Chapel Hill, North Carolina that is, the folks behind Topo Piedmont Gin (get it? Top O’) Restaurant, Brewery and Distillery have a line of spirits which thus far has won a great deal of accolades. But where it counts is what’s actually in the spirits, and they’ve left no box unchecked on the craft gin scorecard. Local? Check. North Carolina Wheat. Organic? Yep, certified. Even the name Piedmont refers to the Carolina foothills, bringing us full circle.

Nose: Sweet and a bit floral. Ripe berry in the top notes, creamy vanilla in the mid-notes. Juniper as well and a touch of citrus and cream, reminiscent of lemon curd. Bright and welcoming.

Palate: Some of the citrus present at first, bright in the top notes of Topo Piedmont Gin. Creamy with a buttery, flaky crust. Hints of spices, quickly giving way to the meat of the taste. Sharp, punchy juniper. Cardamom and other baking spices. The base notes reveal a touch of velvety grassy sweetness, but predominantly fresh mint. Nice quality spirit: mouthfeel is medium soft, with a slow warming sensation leaving heat on back of palate. The finish is crisp, a touch of the floral fruit note from the nose returns, albeit briefly, before leaving a crisp, pleasantly warm sensation on the palate.

Easy to drink and pleasantly contemporary with a nice amount of juniper. A good bridge for fans of the classic style breaking over into the contemporary styles. I quite enjoyed it on its own, although it was not as assertive in cocktails as I expected for 92 proof.

The Gin and Tonic was extremely easy-to-drink as well, though it betrayed Topo Piedmont Gin’s more contemporary qualities. Fruit and cardamom came through most strongly, with a hint of cinnamon on the finish. A bit unexpected, but the tonic really elevated and brought out some notes that didn’t seem very evident on its own. Recommended.

Topo wore a completely different hat in the Martini: creamy and somewhat mellow. Vanilla and spiced cake on the finish. Again, juniper wasn’t necessarily as far up the front as I might have expected, although I would be lying if I said I did anything other than quite enjoy it. Very smooth and nicely balanced. Recommended.

The Negroni was perhaps the most surprising of the cocktails I tried it in. Although not necessarily a disappointment, the murky base notes of this drink failed to highlight the gin’s finer points. A touch of juniper up front, a spiritous push on the back end with Campari dominating, but detectable hints of cardamom and fresh mint.

The more I play with it, the more I think that Ted Haigh’s Three to One is really a rather ingenious cocktail. My notes have the words “Citrus Harmony,” and Topo provides a beautiful counterpoint to the sharp sweet acidity of fresh lime. Long and sweet, tart apricot finish with fresh lemon in the mid notes.

Finally, we took Topo Piedmont Gin for a ride in the Aviation. Lemon and Orange in the top notes, fresh with baking spice, lemon, juniper, and a warm grainy pleasantness, with the mid-notes veering slightly towards pine. Really quite nice, complimenting quite nicely while again showing off its variety of different botanical profiles.

Well balanced, Topo Piedmont Gin bridges the worlds of classic and contemporary gin. It never lacks in juniper profile, instead skillfully interweaving staples of the contemporary style, such as cardamom and mint, while resting on top of a smooth, well-made base spirit. Overall, it’s not hard to see why the accolades have been coming in for Topo Piedmont Gin. It’s a gin that I quite liked and would be proud to have on my bar.