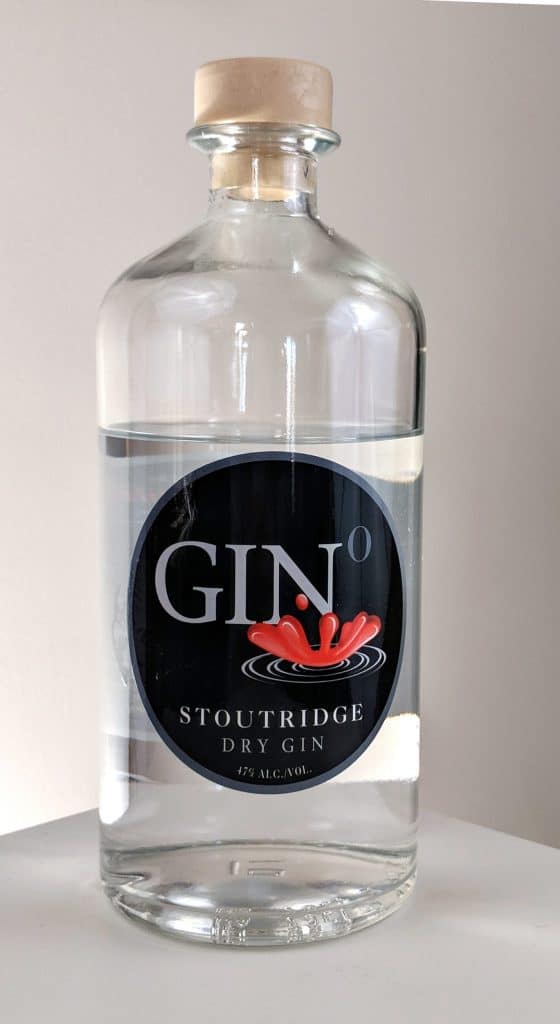 Stoutridge Estate used to be home to 18th century grapevine stock which as likely ripped out during prohibition. They re-planted the vines in 2001 and opened doors with their first wines in 2006.

With a lot of history at their back Stoutridge Winery and Distillery launched Gin0, better known as Stoutridge Dry Gin using their grain-based Six2 vodka as a starting point.

Stoutridge Dry Gin has a malty grain-forward nose with hints of anise on the edges.

At first blush, it might be best to call a Gin0 genever or a Holland-style gin. The nose reminds me of a heady grain-forward genever, with some intense— but ultimately secondary— botanicals on the nose. Aniseed combines with coriander to suggest a spiced bread or intensely aromatic pho broth. While nice on many levels, Stoutridge Dry Gin is anything but traditional.

Grain at first, juniper is present mid-palate— but radiant base spirit heat and anise notes largely dominate the palate.

Gin0 has a nice mouthfeel. Moderately viscous, it adds an impressive longevity and stickiness to some of the botanicals here. A slight sweetness and hint of citrus on the tip of the tongue; it quickly departs and Stoutridge Dry Gin brings a heady grain note. Rich, with a hint of hay, corn, and barley, juniper is present but subtle.

Aniseed with a touch of grassy fennel seed hovers on the finish. Stoutridge Dry Gin then finishes with a nutty roar of heat— hints of almond, licorice root, calamus root, and anise hover for a moderately long time.

I recommend treating Gin0 as if a genever. The grain notes and intense spice is so strong that it doesn’t work as most other dry gins in a drinks like the Aviation, Corpse Reviver #2, or Martini.

I recommend trying a Death in the Gulfstream or Improved Holland Gin Cocktail— or most simply just an Old Fashioned. Gin0 is more a throwback to a different time or a different style.

Stoutridge Dry Gin has a lovely grain and spice flavor that is sure to appeal more to fans of genever than other dry gins. As long as you know what you’re getting, Gin0is a well made and quite delicious product. But Stoutridge Winery and Distillery’s gin in this case is not a plug and play swap for Gordon’s or any other mainstream dry, classic gin. Fans of white dog, residual vodkas and the aroma of distilleries will find a lot to like about Stoutridge Dry Gin.