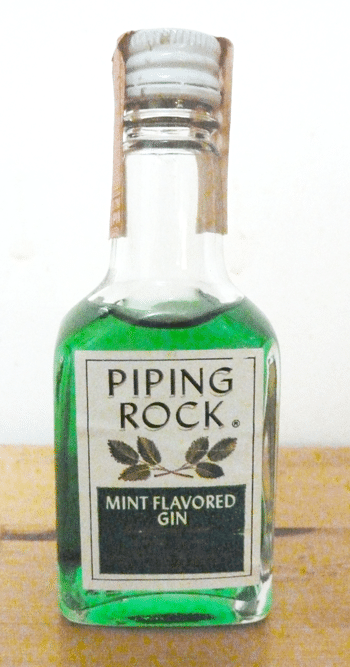 The name Piping Rock has been in use as a brand for gin since 1935 (and was registered officially in 1955) by Luxco hailing out of St. Louis Missouri. They have a wide array of brands and names in their portfolio; the Piping Rock name still is mentioned on their website. Piping Rock Mint Flavored Gin is long gone, but there is still the aforementioned Sloe Gin, Blackberry Brandy, Peach Brandy, Apricot Brandy and Peppermint Schnapps [list here].

The color of Piping Rock Mint Flavored Gin is nauseating and vivid: a decidedly unearthly shade of green. My immediate thought was that it was the color of Scope. Amazingly, this bottle was probably at least 20 years old and the color was as bright as the day it was bottled.

I swirled it around. No sediment noticeable in the poor. On the nose was the strong note of mouthwash(!) once again, not sign of juniper or anything that would even indicate that it might have been a gin. I assumed based on the proof and the overall quality that this was a compound gin and the gin and mint flavors were added to a neutral spirit post-distillation. I expected some of those notes to remain. But whatever juniper there was seems to have long since left this drink.

On the mouth, it tastes like mouthwash. Which I suppose is fitting because I was going to spit anyway. Overall it tastes rather nauseating. Its a strong harsh peppermint flavor (a la Rumple Minze?) and seems to be much harsher than its relatively tame 70 proof would otherwise indicate that it should be.

Piping Rock Mint Flavored Gin may have been better at the time this was bottled. In the past some miniatures have clearly lost character and degraded in quality.

However, based on what I tasted, Piping Rock Mint Flavored Gin seemed more akin to mouthwash than gin and I’d have a hard time recommending anyone who also finds a bottle— to also drink the bottle. If you want a mint flavored gin today, seek our Baffert’s Mint Flavored Gin, or make some yourself.