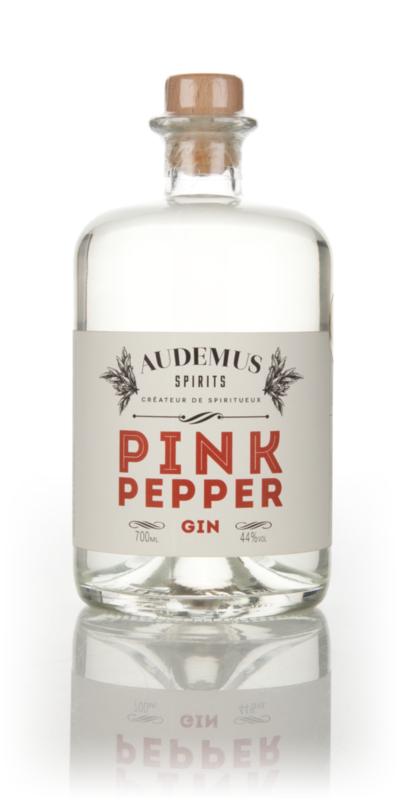 Pink Pepper Gin is Audemus Spirits’ signature creation. An incredible melange of unusual gin botanicals. They’re each handled individually and distilled separately. The base spirit is a neutral grain and the namesake pink peppercorn is among three botanicals that are vacuum distilled at low temperatures (juniper and cardamom being the other two). There’s also some secret botanicals in the mix as well.

I’ve had this batch for awhile (Bob’s Batch, Batch III) , and I’ve held on to it because of an interesting note I read in Gin Foundry’s article on the same gin, “Pink Pepper Gin is designed to age… a young bottle will place the pink peppercorns, juniper and cardamom’s spicy notes at the fore, while an aged bottle will push the vanilla, tonka beans and honey to centre stage.” This is highly unusual for a distillery to call this out specifically. “Pepper Gin is hand crafted and intricately designed to evolve over time, both in the glass and in the bottle” according to the Audemus Spirits website. Gins do change over time even in the bottle. So I’ve given this gin almost two years on the shelf since I wrote my last book, to see how this effect manifests over time.

The Botanist is IN: Pink Pepper

Pink Pepper Gin features a couple highly unusual botanicals. Firstly, let’s talk about the signature botanical, the pink peppercorn. Not botanically, nor technically related to true black pepper, the berries come from a South American shrub and are so named because they physically resemble black peppercorns and have a slight peppery nuance. The American Food and Drug Administration have had a contentious relationship with the small berries (this is the beginning of a theme here in this gin, stay tuned), at one point vociferously disagreeing with the French government over the import of the berries. The hubbub has since died down and the peppercorns are currently available stateside; however, the stigma still remains*.

The Botanist is IN: Tonka Bean

Another contentious (at least in the United States) botanical in this gin is the Tonka Bean. It’s currently still banned stateside for a couple of reasons. The official one being that the beans from this South American tree contain a large quantity of coumarin (generally <3% of essential oil of bean by volume). The more probably reason for the ban of Tonka Beans specifically might be that it was a common adulterant used to deceive customers who thought they were buying vanilla.  From a 1906 government report from the state of Connecticut, “The common adulterants of vanilla extract are tonka bean extract…tonka beans are much cheaper than vanilla beans and have a ranker flavor due to coumarin.” Fears of so-called “Mexican Vanilla” endures to this day, despite Mexico being one of the places vanilla grows naturally.

But anyway, if you’re not afraid, come closer. The Tonka Bean is a beautiful flavor that imparts a captivating combination of vanilla, marzipan, caramel, dark honey and cinnamon bark.

So for stateside gin drnkers, let Pink Pepper Gin be a celebration of two marvelous flavors that have been largely unavailable to you.

As we mentioned above, Audemus Spirits says their Pink Pepper Gin changes with time. Let me take an excerpt from my book GIN: The Art and Craft of the Artisan Revival to share what I said about Pink Pepper’s taste in early 2015 when I wrote it:

“The flavour profile, true to its name accentuates the flavor of pink peppercorns down to a tee; dry and freshly cracked on the nose, the palate is rich and creamy with peppercorn, vanilla, butter topped cinnamon spice cake, all with the right amount of juniper right behind it.” I went on to extol its virtues as a Gin and Tonic as well.

A couple years later, there’s sweet cinnamon cake and pink pepper on the nose. Creamy and vanilla tinged, it’s absolutely endearing. It’s perhaps my favorite nose in all of the world of spirits. It’s light on juniper; however, there’s just something so captivating and so unusual about it. The first time I nosed this gin, I fell in love. I’m still in love all these years later. But as a gin critic, it’s worth pointing out that you may be surprised to find out this is a gin if you stopped at the nose.

The palate is honey drizzled cardamom spice cake early. Peppercorn and a kiss of juniper mid-palate. The juniper radiates with a slight piney air. The finish is strongly suggestive of a vanilla frosting drizzled warm cinnamon bun. You can really pick up strong intimations of both cinnamon and the Tonka Bean here (yes, the Coumarin note is strong). The pink peppercorn carries a consistent and subtle spiciness to it; it truly lasts all through out.

The finish has honey, vanilla, cardamom and cinnamon. It’s rather short, but it’s quite lovely.

In general, I don’t find a ton of change between my 2015 tasting notes and my 2017 tasting notes. This is not to suggest that a gin can’t change; however, in this case I just don’t see a ton of flux. It’s just as good today as when I first opened it, save some of the powerful pink peppercorn and coumarin top notes that were extraordinarily intense.

If you’ve been drinking vanilla vodka or other creamy, evocations of confectioneries flavored vodkas** this gin might be the gin to bring you into the fold. It’s incredibly accessible to nearly anyone. The palate is intensely and delicately flavorsome with a lot of depth.  I’d recommend this to anyone. Even if they weren’t a gin drinker.

To gin drinkers, I’ll acknowledge that perhaps Pink Pepper Gin is light on juniper. However, I also want to say this: this gin is incredible. The combination of botanicals is unusual but also really well done. It makes a great Martini. A stellar Gin and Tonic, and an unusually creamy and dessert-like Negroni.

Bartenders sure won’t make this their default pour, but Pink Pepper Gin should be a go-to for creative cocktail crafting.

Pink Pepper Gin is one of my favorite gins. In my book I said that this gin personified the “wild west” of contemporary gins, and I stand by that statement. If you needed proof that the wild west holds some promise pick up a bottle of Pink Pepper Gin. I’m in love. I’m pretty sure you will be too.

*TL;DR if you’re allergic to tree nuts, eat Pink Peppercorns with caution.
** I’m aware, you’re probably not a reader of this site.