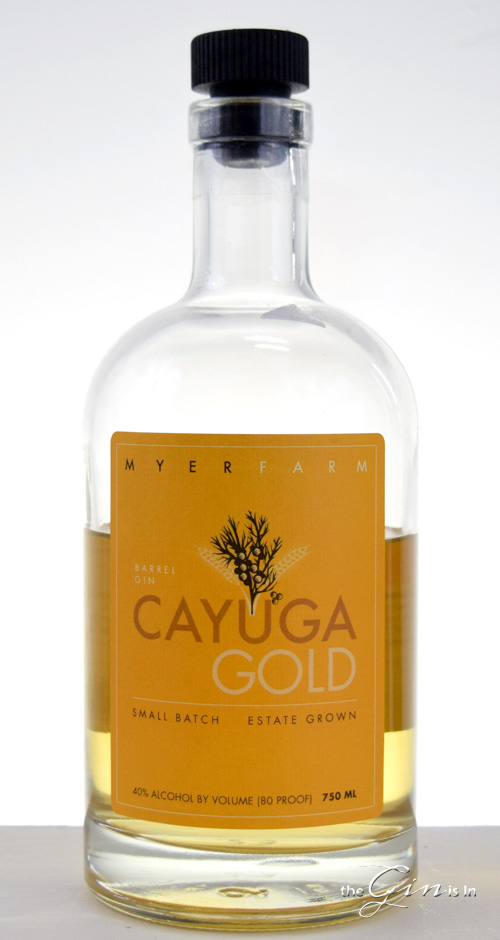 Myer Farm Cayuga Gold Gin is a mashup of two of Myer Farm’s products: the spirit starts as their signature, flagship Myer Farm Gin, which is then rested in barrels which formerly held their line of whiskeys. The distillery is grain to glass— er “field to flask,” to borrow their words— with an organic certification to go with it. Although you might normally think of New York’s Finger Lakes as a wine region, Myer Farm Distillers is among those who are quickly making it a place to look for New York’s Distillers as well.

Lovely,creamy, vanilla, citrus and spice laden nose. Hints of orange sherbet, oak, and buttered cinnamon toast(!). This nose is outstanding. It almost resembles the nose you might expect from an aged honey liqueur like Krupnikas, albeit with a touch more spice. I love the way the aroma comes across, it’s beautiful and rich.

The palate of Myer Farm Cayuga Gold Gin is bold and flavorful as well; however, much more gin like quality comes through. Orange zest, cinnamon and cassia, a splash of honey— juniper begins building mid-palate, culminating with a dominant presence late— oak and wood type notes color the finish. Medium long, with residual hints of charred wood and juniper needles. The hint of sweetness that came out mid palate fades away, and the finish is dry and woody, with some nice character reminiscent of a whiskey or rye.

The spirit has a nice quality mouthfeel, moderately thick, with a pleasant smoothness and just the right amount of warmth. Overall, as with many aged gins, it can be a challenge to mix with it. I highly suggest it neat or on the rocks, finding that even the addition of sweet in an Old Fashioned or Bees Knees to be a touch too much. Rather than adding the sugar, just add some bitters and try it Pink Gin style. The creamy, cinnamon notes shine when mixed in a Varuna Cocktail as well or even more especially, a Gin Alexandria (i.e. a Gin Alexander made with barrel aged gin).

This is nearly as good as it gets in the world of American and Barrel Aged Gin. This is an exquisite spirit and well worth seeking out if you’re looking for a good aged gin to sip neat. Highly recommended, both in its class and on its own.