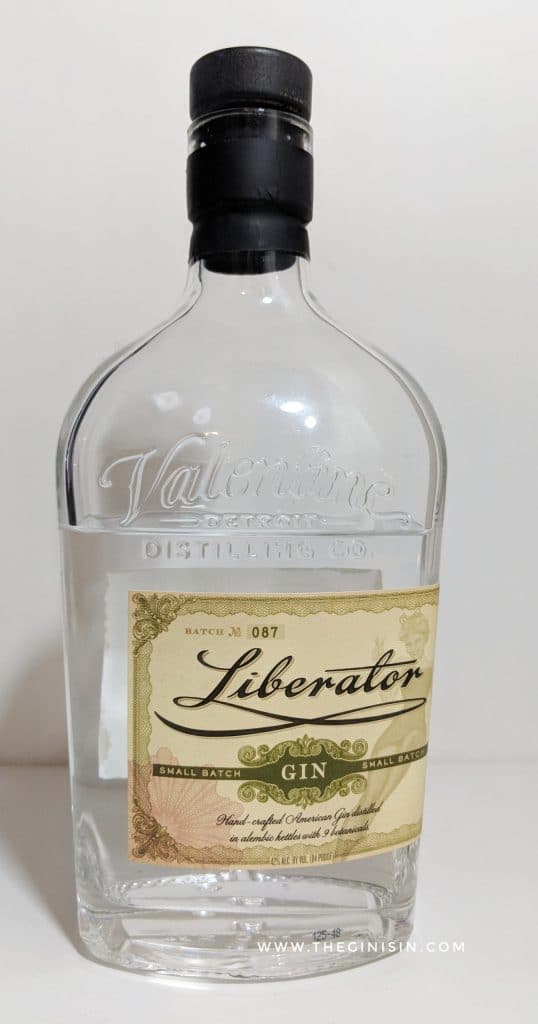 Valentine Distilling Co. out of Detroit Michigan produce one of the American craft gin renaissance’s most awarded gins. In fact it won “Best in Show” at the American Distilling Institute’s annual judging in 2013. Liberator Gin isn’t new to the game by any means, but it’s still going strong years later.

Liberator Gin is distilled through “two alembic distillations” in a Christian Carl still and features nine botanicals, including three kinds of citrus fruits.

Liberator Gin is intriguing to the nose— especially as it suggests several botanicals which are not among those listed. Lots of spiky, candy red hot cinnamon is complemented by buoyant notes of pink peppercorn, Swedish cardamom buns, and subtle flat, wet juniper berry.

Sipped, hints of the several citrus fruits in Liberator Gin add a hint of sweetness early.  Cardamom is particularly bold mid-palate. Then there’s a bit of orange zest dotted with cloves, stocky round cassia bark, and it finishes with a tangy hint of anise and licorice.

The finish is incredibly long with oblong spice notes receding quietly on the edges of the palate. Liberator Gin is evocative and as powerfully flavored on the palate as it is on the nose.

Liberator Gin isn’t the kind of gin you can mix with and lose (well without trying, really hard). Bartenders mixing with Liberator should be aware that it’s bold and assertive flavors will transform drinks.

It’s smooth enough for a Martini. I definitely prefer it with the more traditional olive garnish, or with bitters in something like the Pascal Martini.

In a Gin and Tonic, cinnamon and cardamom take over. You could try lightening it with some citrus zest; however I think it’s best complemented by something like Fever Tree’s Aromatic Tonic— or just a dash or two of bitters.

To my taste, the cinnamon may be a bit too dominant— it tends to overshadow some of the other botanicals. Liberator Gin features three citrus fruits, and any one of them might have a chance to shine if the spices were dialed down a touch.

However, that critique being offered, it’s still worth noting— Liberator Gin is a delicious spice-forward contemporary style gin that I’ve admittedly been a fan of for some time. Fans of the style will find a lot to like about this gin. It’s bold, aromatic, and anything but shy.

But others looking for more juniper or balance might be advised to look elsewhere. Named for a B-24 bomber that was produced in Detroit during World War II, it is a spice bomb of a contemporary-style gin that works great on its own and in neutral/savory cocktails but is best avoided in floral drinks. But used properly, it’s effective and really nicely done.