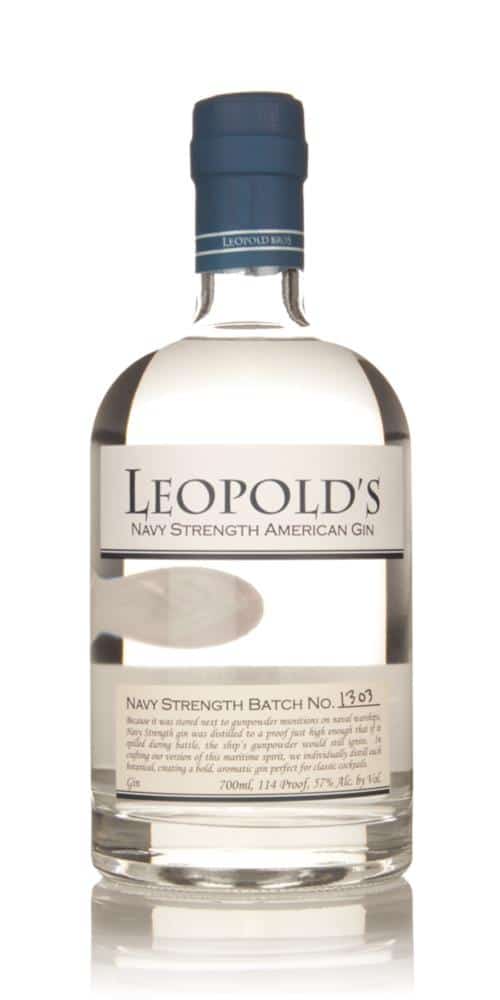 Navy Strength Gin is undoubtedly powerful stuff. That’s just the proof. Leopold’s Gin is among the most respected names in craft gin. Venerable and has stood the test of time. But for their Leopold’s Navy Strength Gin they did something that’s rather unusual for a distiller working on a Navy Strength gin. Most distillers give us a “less watered down” version of their main gin. So the flavors are more intense but its remarkably familiar.

But not here. Leopold’s Navy Strength Gin is a complete new from-scratch creation specifically designed to be mixed. The flavors are vivid and bright, painted with a thick paint brush. This isn’t the Lepold’s you’ve had before. It is truly it’s own beast:

Rumor has it they doubled the juniper in this batch compared to Leopold’s Regular Strength Gin, but wow can you tell. Lots of juniper and a hint of lemon. Strong and to its credit the only thing strong is the aroma. You’re not getting a whole lot of indication of the heat in here. Just clean gin.

On to the tasting, and this is where it becomes quite clear what this gin’s point of view is. Almost like taking a first sip of Bergamot oil: bitter, a tad sour and slightly citrus. The juniper spice hits you almost as potently, but amidst the loud notes, there’s some more subtle tinges and textures on the periphery. A bit of cardamom, even a hint of orris root. Brothy and vegetal notes in the background as well, giving the faintest intimation of grandma’s soup. But the loudness dominates the palate generally.

I would surmise, with these bold flavors that Leopold’s Navy Strength Gin would probably be best tamed by mixing.

The same notes which dominated it neat are also absolutely dominating in a Gin and Tonic.

Navy Strength gin isn’t usually built for Martinis, and although I thought this was a harmonious pairing of notes, the flavor and intensity was a but more than I might have liked. Cutting it down to a more acceptable strength with a dash of cold water actually works quite well.

Even in a Negroni, the heat is evident and the flavors are bold.

Overall, mixing helped tone down Leopold’s Navy Strength just a tad, but I found the bitter/sour citrus notes of the Bergamot a tad too much even in some of the most powerful cocktails. I found myself wishing for just a tad bit more restraint, and a little less power.